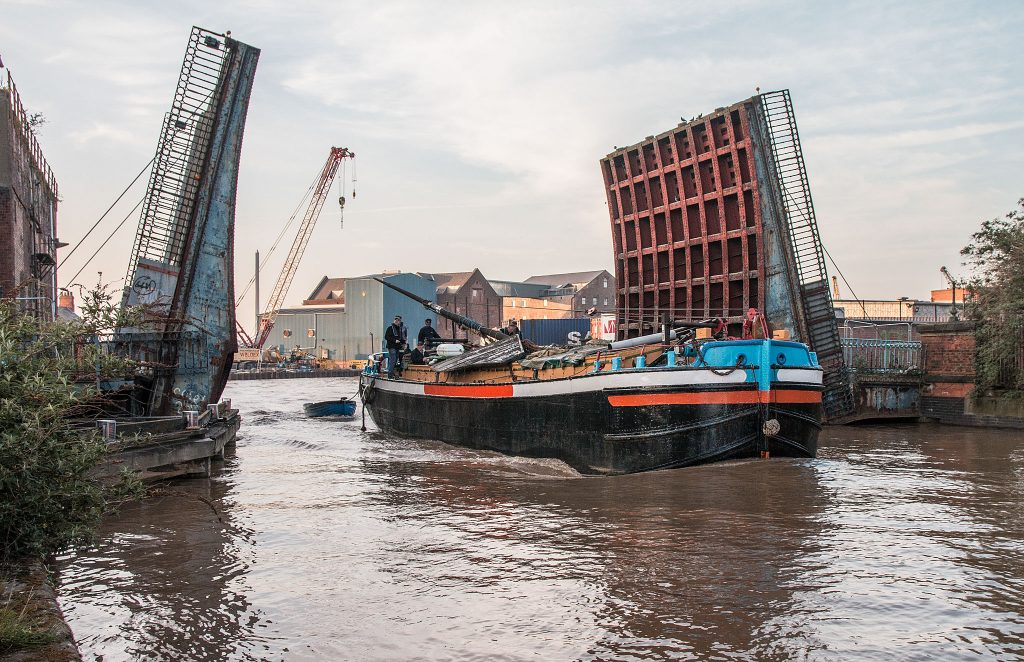 The free exhibition showcasing both films at Hull Maritime Museum will be on display from Saturday July 6th and will run until the end of September. The museum is open Monday – Saturday, 10am – 4.30pm, and Sunday, 11am – 4pm.

The Open Bridges: A River Full of Stories film and exhibition is opening at Hull Maritime Museum on Saturday 6th July 2019 until the end of September.

A River Full of Stories is a new project which preserves and publicises the heritage of the River Hull, its bridges and the vessels which have used it over the years. Made possible by money raised by National Lottery players and organised by the partnership who devised Open Bridges in 2017, they have spent the last two years listening to and recording stories from people who currently or previously lived or worked on and around the river.  The memories and stories are part of a film and presentation book which will be given to every library and museum in Hull and the East Riding in autumn 2019.

This new initiative follows Open Bridges which made history when for the first time all 13 of the bridges over the River Hull raised, swung or closed simultaneously splitting the city of Hull in two on 22 September 2017. It was a logistical and artistic first, conceived and managed by Hull musicians Rich and Lou Duffy-Howard, who said: “Open Bridges is a celebration of the river, the lifeblood of the city and an exploration of real Hull culture.”

Organiser Lou Duffy-Howard said, “The memory sharing sessions we held at Hull Maritime Museum and on board vessels on the river were fascinating and uplifting. We heard and recorded first hand stories and memories of people’s lives and what it was like over the years. This important aspect of Hull’s history has often been overlooked and it has been amazing to learn about the skills and dangers, the mishaps and side lines, the home life as well as the working life on the river.”

Richard Duffy-Howard continued, “We were delighted to be welcomed on board beautiful historic vessels the MV Syntan, sloops Spider T and Amy Howson, and the Humber keel Comrade to meet the people who have restored and sail them. We learned about the River Hull’s rich history of many uses from small pleasure craft and racing scows to commercial vessels with hundreds of tonnes of cargo. We met people whose families worked on the river for generations, and told us about the times when barges and other vessels filled the river.”

The Hull: Yorkshire’s Maritime City Project, a project funded by the National Lottery Heritage Fund and Hull City Council, is extremely happy to support this fascinating exhibition that will draw on first-hand stories from those with strong connections with the water.

Councillor Marjorie Brabazon, Chair of Hull Culture and Leisure, said, “Joining forces with projects and partners like A River Full of Stories is a great way of sharing broader maritime stories and enable visitors to discover more about Hull’s rich maritime history.”

The memory sharing sessions have all been filmed by Humber Film Creative Community and transcribed for the book by Hull based author Russ Litten. The stories and photographs gathered will be featured on the Open Bridges website and in the presentation book which will available in all Hull and East Riding libraries in the autumn.

The exhibition at the Maritime Museum features both Open Bridges and A River Full of Stories films on continuous loop. The original Open Bridges film, made by Humber Film Creative Community and selected by film festivals in the UK, Africa and Asia is a multi-camera aural and musical documentary, edited by Phillip Codd. It features a musique concrète soundtrack by BAFTA winning composer John Stead, composed using sounds of Hull bridge mechanisms and the surrounding environment that John recorded and manipulated to create a dynamic soundscape.

The 35 minute River Full of Stories films can be seen for the first time as part of the exhibition in Hull Maritime Museum as well as the original 20 minute Open Bridges film, screened again especially for the exhibition. Both films will be on continual loop throughout the exhibition.

The free exhibition showcasing both films at Hull Maritime Museum will be on display from Saturday July 6th and will run until the end of September. The museum is open Monday – Saturday, 10am – 4.30pm, and Sunday, 11am – 4pm.