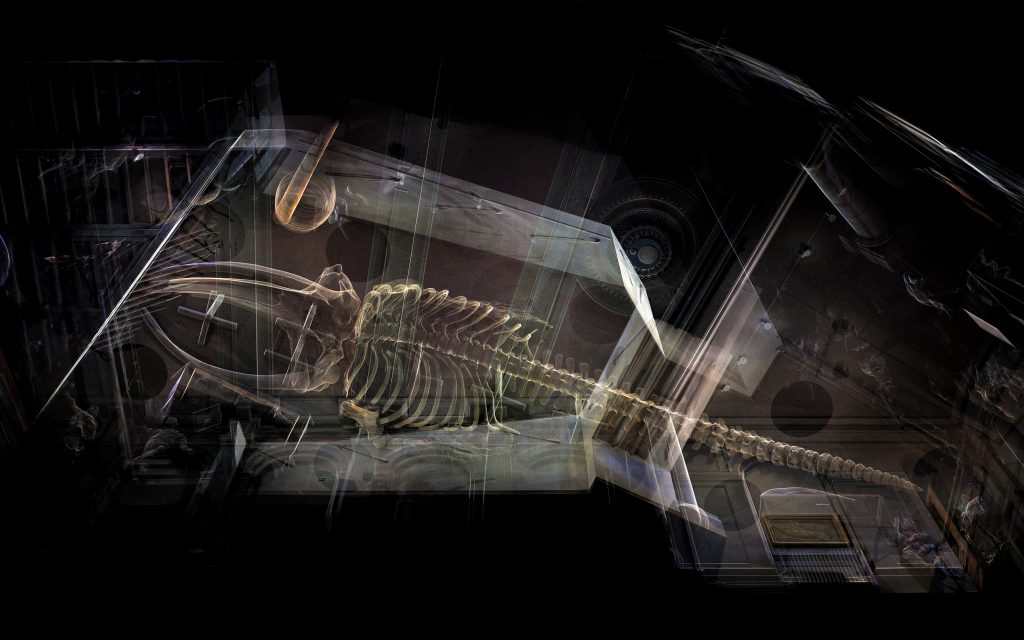 3D laser scanning of the 40ft North Atlantic Right Whale skeleton to be the basis for Heinrich and Palmer’s new public artwork.

Leading contemporary artists, Heinrich and Palmer, have created a new and stunning visualisation of one of the most popular objects in the Hull Maritime Museum’s permanent collection.

Lumen Prize nominated artists behind the ‘Ship of the Gods’ at Hull Minster as part of Absolutely Cultured’s Urban Legends and Northern Lights, Heinrich and Palmer have been commissioned to create new and innovative public artwork to reflect the city’s rich maritime history. This is the first artistic commission of Hull City Council’s multi-million pound investment to bring the city’s rich and powerful maritime story to life.

The 3D laser scanning of the 40ft North Atlantic Right Whale skeleton was undertaken to gain data on its weight and dimensions. The data captured from these scans along with additional scans of the collection will be used to create two new bodies of work – a digital film which will be shown in the refurbished museum and a series of stone waymarkers which will connect the routes leading from the museum, through Queens Gardens and on to the North End Ship Yard and the Spurn Lightship.

As part of the new displays within the refurbished museum, the 110-year-old skeleton of a young female Right whale, approximately two years old and not fully grown, will be reanimated. With only an estimated 400 North Atlantic right whales left in the world, the exhibit will raise awareness of the serious conservational challenges these whales face today.

Councillor Daren Hale, Portfolio Holder for Economic Investment, Regeneration and Planning, Land and Property, said: “This is a unique and rare opportunity to create artwork to tell the city’s rich maritime story.

“Working as part of the wider team with lead consultants Purcell Architects, Southern Green Landscape Architects and Exhibition designers Haley Sharpe Design, the chosen artists have been tasked with creating public art commissions in unexpected and different ways that gives a voice to the city’s maritime past, present and future.

“This work aims to unlock the full potential of the city’s maritime story and benefit those that work, live and visit the area.”

Anna Heinrich, from Heinrich and Palmer, said: “Our aspiration is to create a series of unifying interventions which weave across the sites of the Hull: Yorkshire’s Maritime City project. Our starting point builds on the work and research we undertook for The Ship of the Gods – a large scale multi media event created for Hull Minster back in 2018.

“We will draw on this rich visual resource along with new content developed from additional scans of the collection, to create a series of artworks which will be displayed in the Hull Maritime Museum and the routes connecting the North End Shipyard Visitor Orientation Centre and the Spurn Lightship.

“We are very much looking forward to working in Hull again and on this exciting and large scale project that will take visitors on an imaginative journey through Hull’s maritime heritage.”

Additional 3D laser scans of other objects held within the Hull Maritime Museum collection which include ship models, figureheads, whale bones, navigational aids as well as some of the objects already on the People’s Choice shortlist will also be completed.

Other artists have also been appointed to develop new artwork, films and installations as part of the Hull Maritime project. Artists Neville Gabie and Patricia Mackinnon-Day have been commissioned to create new films for the Maritime Museum, to be shown as part of the exhibition on the ground floor, exploring the broader theme of “What’s it like to be at sea”.  Furniture designer and maker, Angus Ross, has been commissioned to create a new series of bespoke contemporary furniture for key areas within the Maritime Museum, drawing on the traditions of the building and the sea.

Artist Katayoun Dowlatshahi has also been commissioned to create artwork for the Queens Gardens, developing artwork that will offer a powerful and engaging voyage through Queens Gardens, creating a key link between Hull Maritime Museum and North End Shipyard.