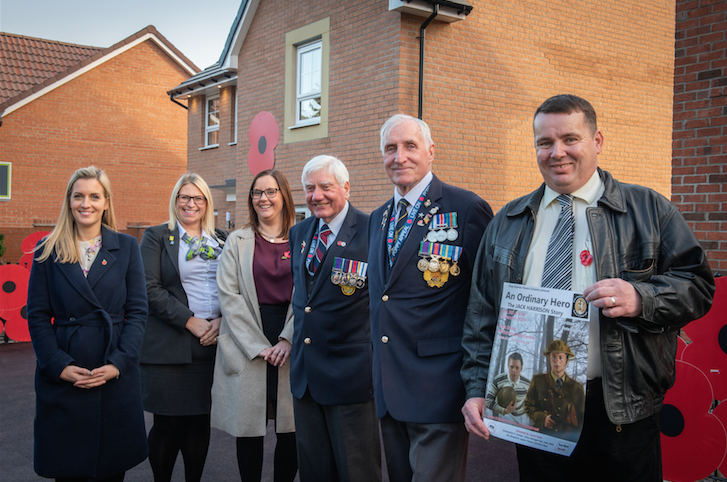 To mark Remembrance Sunday, Barratt Developments invited two local former veterans to its Poppy Fields development to collect a £1,000 donation towards the Hull branch of the Royal British Legion, as well as donating £1,000 to a local playwright, who is producing a play about local fallen hero, Jack Harrison.

To mark Remembrance Sunday, Barratt Homes is supporting the Hull branch of The Royal British Legion with a £1,000 donation to assist the charity in providing lifelong support to serving and ex-serving personnel and their families in the Hull region.

Ken Simmonds and Peter Grundy from the Hull branch of The Royal British Legion were invited to spend an afternoon with the sales team at the Poppy Fields development, which was respectfully named with the World Wars in mind, inspired by the famous war poem, “In Flanders Fields”, written during the First World War. The sales team spent an enjoyable afternoon with Ken and Peter sharing stories, memories and discussing the important work of the Royal British Legion.

To amplify further the sentiment behind the development, a group of students from Cottingham High School were invited to name the streets, researching local wartime history, war poems, and Hull veterans to inspire their suggestions. Examples of the street names chosen by the school include Oppy Wood, inspired by a battle fought by the Hull Pals in May 1917, some of whom resided in Cottingham. Other street names include Jack Harrison Avenue, named in memory of fallen Hull hero, Jack Harrison.

Jack Harrison, born in 1890, was commissioned as Temporary 2nd Lieutenant on the 4th August 1916. Harrison was twice recognised for bravery, receiving the Military Cross in February 1917 for leading a patrol into no-man’s land, and a Victoria Cross for his self-sacrifice at Oppy Wood in May 1917.

In celebration of Hull’s treasured war hero, local playwright, Ian Peter Judson, has written the chronicles of Jack Harrison’s life, An Ordinary Hero, which will be staged by The Pony Express Theatre Company at Park Street Performing Arts Centre from November 8th to 10th. Funds raised from the performances will be used towards a statue to honour Harrison, in his hometown of Hull.

Jamie Stephenson, Assistant Site Manager at Poppy Fields, commented: “As a former Royal Engineer, I joined Barratt Developments last year through its Armed Forces Transition Scheme which has supported me in starting a new career as a Site Manager. Having served for almost seven years, it’s a true pleasure to be able to honour local Hull men who dedicated their lives to the Armed Forces, not just at this time of year, but all year-round, and I’d personally like to thank The British Legion for their phenomenal work.”

Ken Simmonds, of the Hull branch of The Royal British Legion, commented: “We’d like to thank Barratt Homes Yorkshire East for their generous donation to the Hull branch of the British Legion and for their continued support. It’s so important to remember those who have served and sacrificed their lives to defend our freedom and to help pave the way for a peaceful future.”