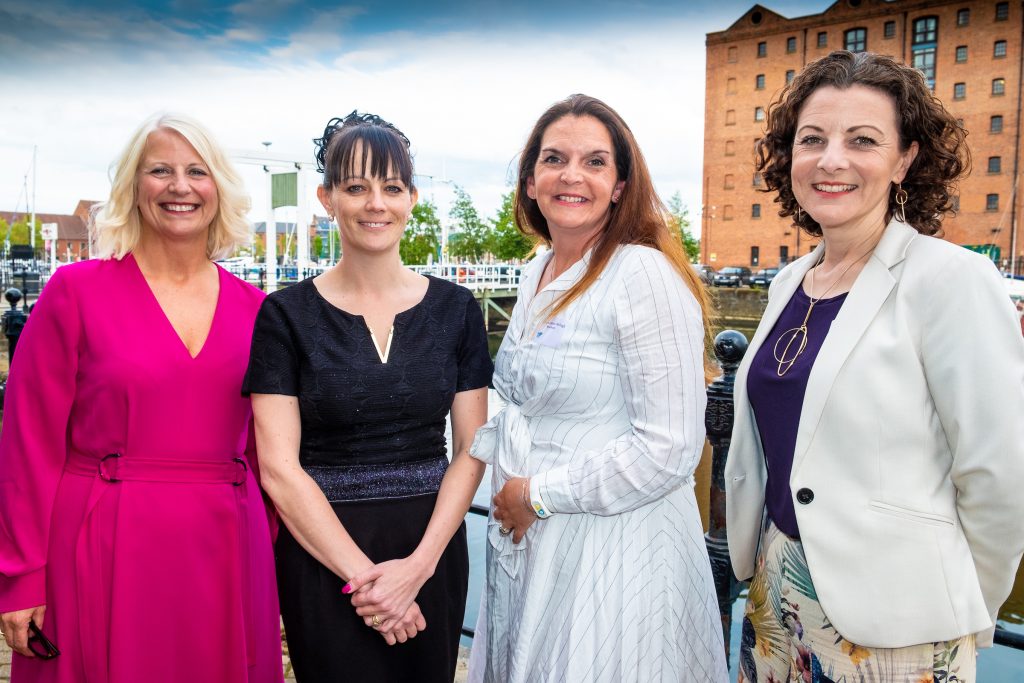 Three speakers who have emerged as some of the most influential women in the regional business scene shared their stories of challenges and success at the annual Inspiring Women dinner, organised by HullBID as part of Humber Business Week.

Michelle Swithenbank, Principal and CEO of Hull College Group, Christina Colmer McHugh, co-founder and director of Moodbeam, and Katy Duke, CEO of The Deep, were introduced by Kathryn Shillito, Executive Director of HullBID, as “accomplished businesswomen at the fore of their game.”

Michelle spoke about her progression from a nurse to her current role where she is leading a transformation of Hull College Group as head of a new team appointed following previous financial and operational issues.

She said: “My passion is about upskilling our learners to provide the community with the carers, trades people, business people, accountants, engineers and more. It’s about selling careers, not courses, retaining the talent in the city and giving people the opportunity to thrive and do well.”

Christina sought out the city-based partners to create Moodbeam as a result of her desire to know how her daughter was feeling after a tricky time at school. The business produced a wearable device which focuses on capturing and making sense of mood.

She said: “The Moodbeam was created with the ambition to transform the way the world sees mood, by making it easier to understand and talk about how we feel.

“It’s been a full-on three years, perfecting and simplifying a solution so that it can be used personally and professionally, and which is being championed by families and communities within social care and organisations such as the NHS, Barclays Bank and Everton FC. They are all intent on helping change the lives of those around them, and their own.”

Katy brought a strong background as an aquarist to her role at The Deep when she was appointed in 2017 and she shared how she is working to display more of what goes on behind the scenes at the award-winning tourism attraction and conservation centre. She also took the opportunity to urge people to adopt an ozone hole approach against single use plastics.

She said: “Single use plastics are causing issues from the surface right down to the deepest ocean levels. Now more than ever it’s a call to action for everybody. Whether you are in the plastics industry or not, everybody has to make a difference in their own personal lives. In the 80s the hole in the ozone layer was the big crisis but we acted globally and made a difference. Plastics is the current issue and it needs the same global response.”

HullBID’s fifth Inspiring Women dinner at the Holiday Inn Hull Marina brought together around 80 businesswomen from Hull and the surrounding area. They heard from Kathryn about the way in which the regeneration of Hull city centre is helping businesses respond to challenges – particularly the shift in retail trends – and work towards a bright future. But the focus was on the potential which can be realised by women working together and by recognising their own strengths and weaknesses.

Kathryn said: “It is vitally important that we instil a sense of self-belief, of positivity, of mental strength and resilience. Many of us will be parents of girls and young women and we play a vital role in raising our daughters to be anything they want to be – and that includes a ballerina or a corporate superstar!

“In 2019, there is growing recognition that successful women still negotiate the double bind. We’re careful not to be seen as too assertive and pushy, yet we cannot afford to be tentative and self-deprecating. Negotiating this middle way is hard work but those who make it to positions of power do this well, forging their own path, doing it their way and achieving greatness.

“Through women-led organisations there is a common theme of sharing personal challenges as well as professional ones with like-minded people. To sometimes have a shoulder to cry on is priceless. It is OK to let our guard down. It is OK not to be perfect and tough all of the time. What is important is being yourself, building your own positive support network when colleagues and counterparts become friends and the load gets lighter and brighter.”