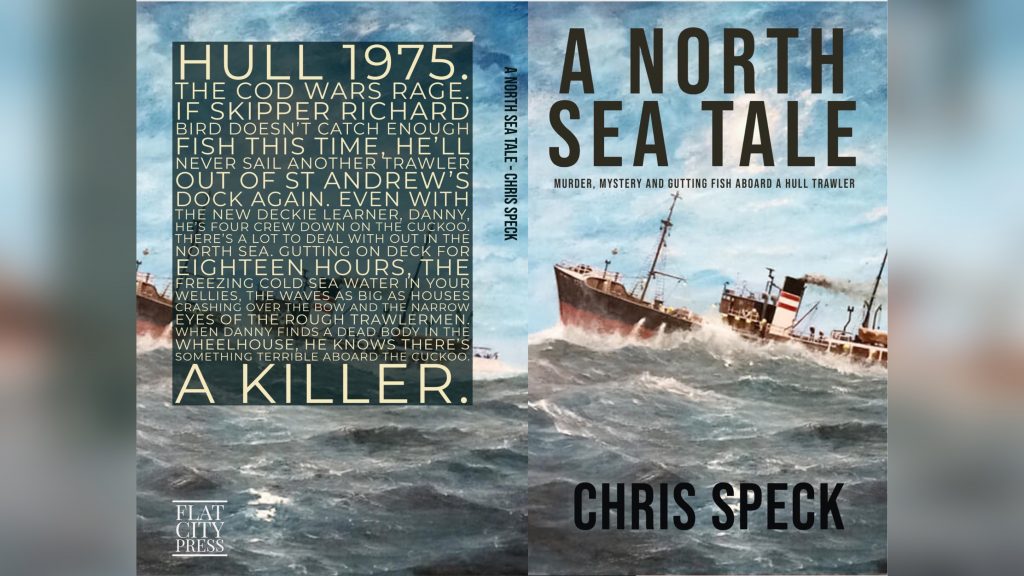 It’s a bold and daring move for a Hull author to place the plot of a novel on a fishing trawler in the North Sea in 1975, the height of the Cod Wars.

Writer Chris Speck has done just this. His next book, A North Sea Tale, is published by Flat City Press this month.

“I can’t promise it’s going to be accurate, but I spent many months talking to trawlermen, talking to skippers, talking to their wives, talking to people linked to the fishing industry, asking them lots of questions. But I tried not to get bogged down with too much detail,” said Chris.

Chris is an east Hull lad, now living in Cottingham, and has family that worked alongside the fishing industry of St Andrew’s Dock.

Chris works as a teacher, teaching English as a foreign language. He’s also a musician, a member of the ‘off the wall’ punk band Black Kes, playing guitar and ukulele.

In his first novel, Beast, Chris wrote about a boxer in north Hull coming to terms with losing his dad to cancer. A third novel, coming out next year, will be about rugby.

The city’s themes are clearly an attraction for Chris as a writer. He draws on local connections, and the people he’s chatted with, to bring his novels’ characters to life.

“I just have to make a leap of faith and try to portray the sort of characters I met when I researched for the book. I keep it real, and I keep it Hull.”

In A North Sea Tale there are two main characters steering the reader through the novel’s twists and turns.

“There’s the skipper of the Cuckoo, skipper Richard Bird,” said Chris. “He’s the chap I talked to, quite an old man now, who left the game quite early, because it was dangerous for him. He’s the father figure.

Extract: Danny steps on board The Cuckoo

The skipper walks to the edge of the ship. His eyes are a steel blue grey as he looks at the tall lad.

“Did Tadman send you?” he calls.

“No,” answers Danny. The skipper looks off the docks and to the offices which are closed because it’s Sunday morning. Tadman is the runner, the man who finds the hands for the Cuckoo. He must have been drunk last night, again. He looks over at this lanky lad in his donkey jacket. “Are you here for a job?”

“I dunno,” says Danny. He really does not know why he is standing there. The skipper reads him. He sees his boots that are a little too big for his feet, his hair out of place and too long with a donkey jacket and sheepish eyes. Skipper Bird has very little time to sell his boat to this young man. He does not want to go without another fisherman because it is unlucky to leave with an odd number of men as well as being less profitable. Tadman had promised him four more hands this morning, and all he has so far is a Geordie with a gammy eye and a limp, who he has never heard of before, and this lad. He needs to find out some information, to see if it’s worth his while talking to him.

“Woodcock Street with my mam and dad.” A good street. He’s perfect. The skipper begins his sales patter.

“We sail for three weeks; it takes five days to get to Norway while you find your sea legs. We land as much cod, haddock and halibut as we can and then we come home. On a good catch, you’ll get fifty quid. If it’s not so good, you’ll get twenty.” The man’s accent is local and straightforward Hessle Road, it has the ring of honesty about it. The skipper has appealed to the boy’s pockets but realises it will take more than this to get him on board. There is no need to go into the stability of his vessel, or that the Cuckoo was built in 1964 and in eleven years has never been anything less than perfect on the rough sea, despite her appearance. He must appeal to the boy’s sense of adventure and the need for companionship. What’s he doing down here on a Sunday morning anyway?

“Step on board,” he beckons. If the boy gets over the gangplank the skipper will have him.

The publisher’s strapline to this novel is ‘Murder, mystery and gutting fish aboard a Hull trawler’, but Chris is keen to point out that it’s not a crime novel.

“This isn’t a crime book. It’s more like a John Steinbeck novel. There’s lots of character development, and a lot of stories from people I heard on Hessle Road. It is a murder mystery, but it’s also a coming of age story about how Danny learns to become a man.”

In his twitter bio Chris describes himself as many things, including a ‘slow runner’. His running pace gives him plenty of plot-planning time.

“I do a lot of running. So I’m thinking of how the story I’m writing is going while I’m running. Sometimes it goes the way I think it will go, and sometimes it doesn’t. I know what will happen at the end, it’s just how do we arrive there. It’s not meticulously planned, because things will happen that you don’t expect.”

“They’re stories about people in Hull. I want to celebrate the people round here, rather than fictional things,” Chris concludes.