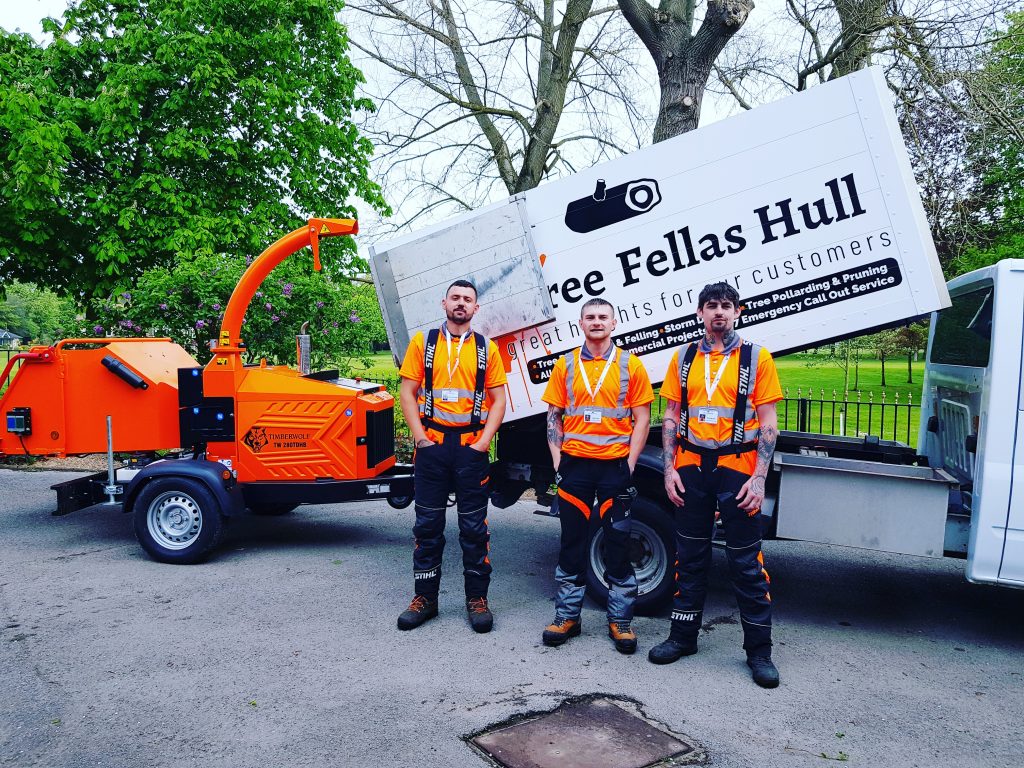 A couple who met in a residential care home are now building their own business, having settled into a home of their own as parents of two young daughters and owners of The Tree Fellas Hull Ltd.

Sarah Fenwick and Gareth Pennington are well ahead of their forecasts just six months after starting out, winning big contracts, upgrading their equipment, recruiting staff and offering guidance to other aspiring young entrepreneurs. But Sarah has kept her job in sales at KCOM, learning skills which also benefit the new venture.

They met in a care home in Hull 12 years ago and later lost touch. But they were reunited after Sarah moved into her own place 10 years ago when she was 18, and they started to build their relationship and believe in a brighter future.

Sarah pursued a career in credit control and then moved to KCOM. Gareth joined Hull City Council on a care leavers scheme, gaining a diploma in horticulture and qualifying as a tree surgeon. Now 29, he left his job in January this year to set up Tree Fellas.

Offering services including planting, dismantling, felling and site clearance, they found the money to buy a van and a wood chipper and recruited Lewis Cook and Scott McCoid, who are training to work at Gareth’s level.

Their ability, effort and a flair for creative marketing has seen them achieve their full-year revenue target at the halfway stage. They offered to take down a towering poplar tree at Brough Golf Club free of charge to feature in their impressive corporate video, Scott covers himself in a suit of green foliage to represent the company as Grassman at business events, and daughters Alyssa (six) and Eva (four) have their own little Tree Fellas outfits complete with plastic saws.

Sarah and Gareth have thrived with the help of KCOM, Hull City Council, the John Cracknell Youth Enterprise Bank, which paid for safety equipment and for Sarah’s Level 1 computerised accounts for business training, and HCUK Training, which secured funding for Level 2.

Di Garbera, who provided the training at Golding Computer Services and is now acting as a voluntary mentor, said: “One of the reasons they’ve been struggling to keep up with the paperwork is the amount of time Sarah has had to spend on accounts, but the training and qualifications will save them time and money. I have never come across anybody who is so determined to achieve and the next step is to put everything she has learned into practice.”

Sarah added: “It started when Gareth realised he had a talent that was valuable to other people, and we decided to give it a shot. We worked and worked and tried to grow, investing as much money as we could back into the business and upgrading the van and the chipper.

“And we’ve met such inspiring people. Charles Cracknell from Hull City Council arranged for us to go to the Chamber of Commerce Expo in Hull and to The Business Day in Bridlington and we took Scott to both of them as Grassman. Sean Royce at KCOM has been a fantastic role model and Di at Goldings has been a superstar!

“We’re getting referrals and recommendations from property companies and managing agents and that’s bringing in bigger jobs but we’re happy to partner with other people in our sector because we take the view there’s enough work for everybody.

“We have managed to change our lives after some very low moments, combining our talents and qualities to create a business that has taken off so much faster than we could ever imagine.

“As care leavers we also want to reach other young entrepreneurs who, like us, have an idea or talent they wish to showcase. We want to help them prove that, no matter what your background, you really can do anything you want to do in life and to reach for the stars.

“We’re learning every day and it’s mind blowing. I always said we were meant to find each other.”