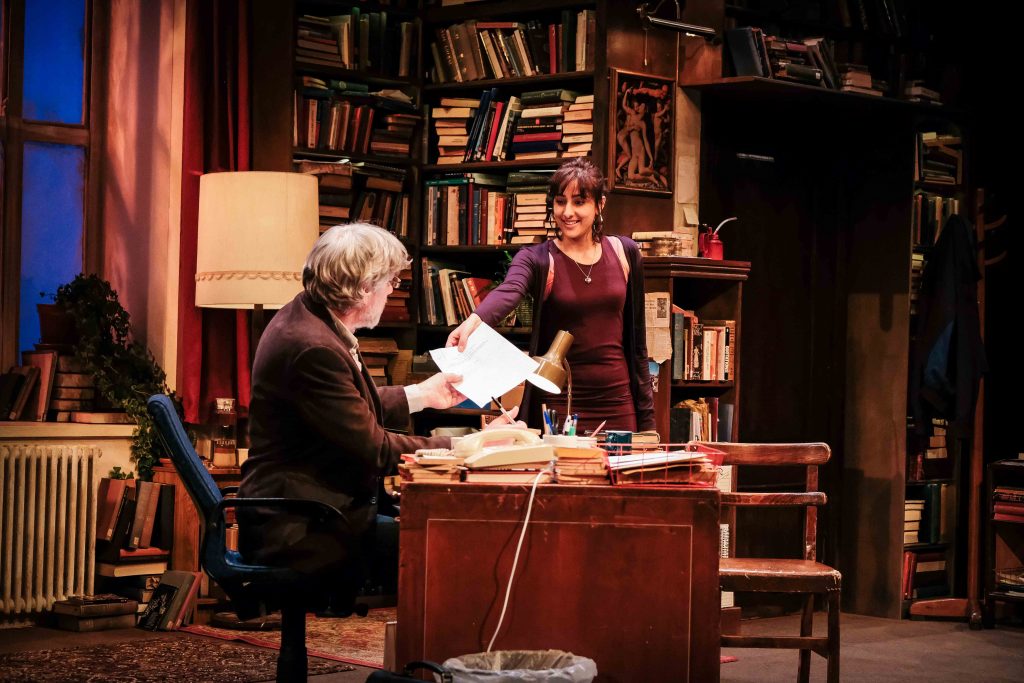 Hull Truck Theatre announce their next wave of creative and entertainment projects as part of Hull Truck at Home. Working with its incredibly talented community of artists, the theatre will offer a programme of high quality drama to be streamed online, as well as a competition opportunity for budding or emerging playwrights.

We are inviting anyone in Hull or East Riding of Yorkshire to submit a ten-minute play for our Ten-Minutes of Kindness Writing Competition. Writers are invited to submit a new play on the theme of kindness and a shortlisted selection will be performed via a digital platform by actors Nicola Stephenson and Matthew Wilson, who were appearing in our production of Jim Cartwright’s TWO when our closure period began.

Mark Babych, Artistic Director of Hull Truck Theatre, said: “Everywhere we look there’s evidence of people doing extraordinary acts of kindness during this period of challenge. At the theatre we have been overwhelmed by the compassion and generosity of our audiences, participants and communities. From small gestures to heroic actions, the theme of kindness seemed the right way to celebrate the best elements of humanity.”

The competition is open for submissions from Tuesday 28 April and the deadline is Monday 11 May, 12 noon. Writers can find full details at: https://www.hulltruck.co.uk/hull-truck-at-home/

Following the success of the theatre’s online stream of Paragon Dreams, which has so far been viewed by over 1,600 people, on Wednesday 6 May at 7pm we will stream a recording of our popular 2019 production of Jack Lear.

Written by Ben Benison based on Shakespeare’s King Lear, the production was directed by Hull-born, Hull Truck Theatre Patron, Barrie Rutter who also played the title role, and featured music by folk legend Eliza Carthy. This recording was captured during a live performance with an audience at Hull Truck Theatre on 30 January 2019. It was originally streamed for free to a closed audience of patients and residents in hospitals and care homes in Hull as part of our commitment to opening up access to theatre.

“With its mentions of myth, along with the superstitions of Hull’s fishing community, this family drama has the weight of an ancient epic.” The Stage on Jack Lear, 2019

Audiences can access the stream for FREE on our You Tube channel here: https://www.youtube.com/user/HTTheatre. Those who are able to will have the opportunity to show their support for the theatre by donating to the Hull Truck Theatre Future Fund.

Director and actor Barrie Rutter said: “A family tale with a very strong local flavour, Jack Lear is our latest contribution to the online streaming service. This production represents and celebrates the theatrical skills of the team at Hull Truck – a rousing story, reality and myth, colourful design, storms and shanties, love and hate. We hope you enjoy it.”

Dedicated to our author, Ben Benison who died December 2019.

A new audio version of Kiss Me, by Richard Bean

Hull-born, award-winning playwright Richard Bean (The Hypocrite, One Man, Two Guvnors),  has specially adapted his play, Kiss Me, editing it to three ten-minute acts which have been recorded for audio by actors Laura Elsworthy and Jordan Metcalfe. Elsworthy and Metcalfe, also both from Hull, played Connie and the Duke of York respectively in Hull Truck Theatre and the Royal Shakespeare Company’s hit, sell-out production of The Hypocrite as part of Hull UK City of Culture 2017. Their recording of Kiss Me will be streamed for FREE on Hull Truck Theatre’s website on Wednesday 20 May at 7pm.

Kiss Me is a post war comedy drama about fertility, sex and survival. Set ten years after the First World War, characters Stephanie and Peter are trying to survive in a world turned upside down. Richard Bean has previously said of the play that it’s about people acting under a set of constraints being imposed on a familiar situation – something audiences might resonate with now. Stephanie is a widow who wants a baby, whilst Peter is a doctor-recommended man who provides the necessary service to women.

Laura Elsworthy and Jordan Metcalfe said: “As two actors often in and out of work, we are really used to spending a fair bit of time at home together. The difference this time being that the future of when we next get to be creative is a bit uncertain, so we were really excited when Mark [Babych] asked us to do something for Hull Truck.

Isolated recording has been fun and looks something like the two of us squeezing around a microphone, surrounded by lots of duvets to cut out any sounds of the outside; not the comfiest of ‘studios’ but definitely a test for marriage in lockdown! We really hope you enjoy our recording of Richard Bean’s brilliant play about trying to find a future in a world that has changed very drastically.”

For everyone who still needs their fix of great theatre, we’ve been asking some of our talented associate artists to record a short monologue from a play of their choice, which we’re sharing across our online channels. So far we’ve had 3 Minute Theatre videos from Hester Ullyart (Paragon Dreams, The Gaul), Nicola Stephenson (TWO), Matthew Wilson (TWO) and Vanessa Schofield (Peter Pan), with many more to come. These can be viewed on our You Tube channel or website: https://www.hulltruck.co.uk/hull-truck-at-home/3-minute-theatre/.

As well as presenting high quality drama content for audiences, we are continuing to work with our participants and artists to ensure they are supported and have creative opportunities whilst at home. Our Act III over 55s drama groups are working on an autobiographic writing project focusing on positive themes such as happiness, laughter, passion, lust, forgiveness and atonement.

For the month of April we are hosting emerging director Annabel Streeton alongside Middle Child on an Assistant Director placement as part of Regional Theatre Young Director Scheme (RTYDS). Annabel is supporting both companies in the development of new work for the future and learning about the practicalities of running a theatre company. At a later date, she will complete the practical element of her placement by being Assistant Director on productions with Hull Truck Theatre and Middle Child. Her blog can be found: https://www.middlechildtheatre.co.uk/2020/04/07/starting-a-directing-placement-in-a-pandemic/