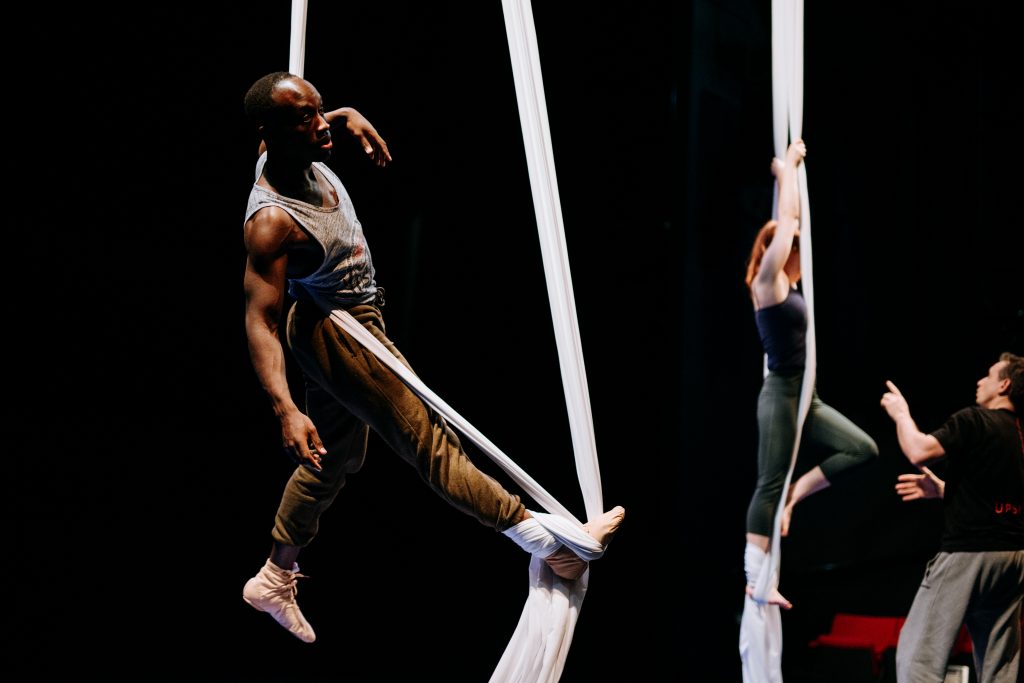 “With every Christmas show we aim to create a visual ‘wow’ moment for the audience when they enter the auditorium. For Oliver Twist it was having the huge wooden bridge overhead as part of the set and this year we are bringing extra magic for the festive period. Working with silks and circus skills gives us freedom to embrace the theatricality of the act of flying, we aren’t trying to hide the support wires – they instead become part of the performance. The combination of this striking imagery along with a beautiful set design, an enchanting score and an insanely talented cast means that the whole family are in for a real treat this Christmas.” – Mark Babych, Artistic Director of Hull Truck Theatre

A famous line from the classic J.M. Barrie story reads that, “The moment you doubt whether you can fly, you cease for ever to be able to do it.” There’s not a shred of doubt as Baker Mukasa (Peter) and Vanessa Schofield (Wendy) confidently ascend towards the ceiling of The Heron auditorium. Having spent the summer doing strengthening exercises for their core muscles they are in their element, gliding through the air.

Baker and Vanessa have been attending a special type of flight school, under the instruction of leading contemporary circus company Upswing. The two principals have been training to use aerial silks ahead of this year’s awe-inspiring Christmas production. These newly acquired skills will be used when the characters fly within the play, as opposed to standard clip-in flying systems. As well as displaying their flying skills, the extremely talented pair will be singing, dancing and acting in this tuneful Pirate Adventure.

Upswing are an internationally recognised company who regularly tour, you might have spotted them at Freedom Festival this year with their show Catch Me. They also performed locally during Hull UK City of Culture 2017, other co-commissioners and producers they’ve worked with include Stratford Circus, National Theatre, Roundhouse and Channel 4.

This year’s re-telling of Peter Pan is proudly sponsored by Hull Trains and is the first time we will ever have cast members flying in the Heron Theatre. Whether you’re 8 or 80, there’s something for everyone in this thrilling adventure – a festive family outing like no other.

Be the first to comment on "Destination: Neverland – A sneak peek of Peter and Wendy learning to fly"