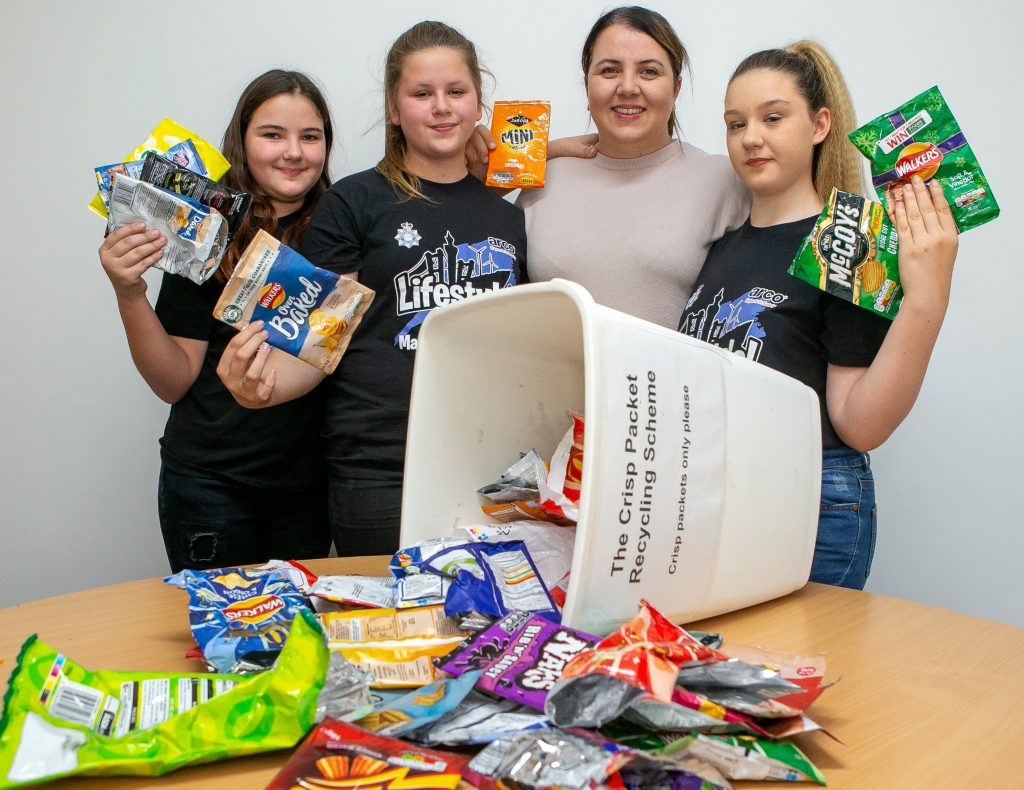 Pictured with Laura Stead are (from left) Abbie Stead, Carly North and Lilly Canham. The remaining two team members, Summer Spiller-Evans and Keira Connor, were absent when the photographs were taken.

When it came to the crunch a Lifestyle team found the perfect pan-Humber project to raise funds for charity and tackle plastics pollution at the same time.

Five girls from Baysgarth School in Barton-upon Humber joined forces with The Deep Business Centre in Hull to collect empty crisp packets and turn them into cash with the help of TerraCycle, which work with major brands, manufacturers and retailers to offer a range of recycling programmes.

So far the girls have helped to raise money for the Lincolnshire Wildlife Trust and Women’s Aid in Grimsby, earning them a place  at the recent Lifestyle 2019 celebration at the Bonus Arena in Hull and a prize of a trip to a Go Ape adventure centre.

Even though the 2019 Lifestyle campaign has now finished the girls, who adopted the team name the Global Girls, plan to continue and keep collecting crisp packets and other plastic waste to raise money for Dove House Hospice in Hull.

The project expanded to The Deep Business Centre after one of the five, Abbie Stead, recruited the help of her mum, Laura, who works at the Centre.

As Foster Service Manager for Foster Care Associates, Laura’s network stretches from Boston to Bridlington and the crisp packets came in from contacts across the region as well as from other businesses based at The Deep.

Laura said: “The girls held their own recycling events during the summer and they asked if I had any contacts at The Deep who could help with the collection. At one point they had about 4,000 packets – I gave up counting when I found out that the money raised is based on the weight!

“The girls made some collection boxes which were placed at sites including cafes and shops, the Princess Diana Hospital in Grimsby and The Deep. They recently handed over about 2,000 packets to Women’s Aid and now they’ve started collecting again to support Dove House.

“Nearly 600 teams took part in Lifestyle this year and they were among the top 90 who attended the celebration night and won a prize. It was a great night and the girls were really pleased.”

Abbie said the girls targeted crisps as one of the biggest-selling snacks and were eager to try to reduce the number of packets finding their way into the sea.

Lilly Canham said all five of the girls were reducing the amount of crisps they eat.

Carly North said they will continue their efforts because of the success of their campaign so far.

Freya Cross, Head of Business and Corporate at The Deep, said: “When Laura told us what was happening we were more than happy to help because we have an excellent network of contacts and we are committed to reducing plastic waste.

“The girls have done a great job and provided valuable support to some important charities. We will continue to help them and we will also try to add to their support for Dove House with some activities of our own.”