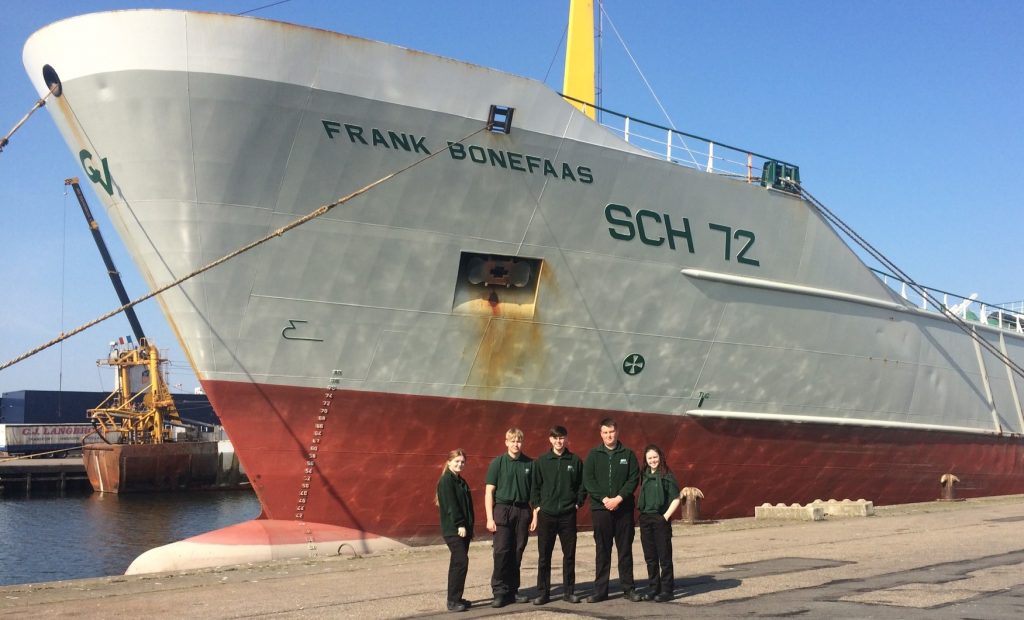 A crew of young apprentices who have just left Humberside Engineering Training Association (HETA) are the first from the organisation to embark on a career at sea.

More will follow in the years to come as a result of a partnership between HETA and Hull Trinity House Academy and agreements with a growing number of employers, starting with an international fishing company based in the Netherlands.

Five young learners, who only joined HETA in September 2018, recently returned from their first trip to the port of Ijmuiden to visit their new employer Cornelis Vrolijk and tour the land-based facilities where they will be working, as well as the trawler Frank Bonefaas, which they will join at sea.

Cornelis Vrolijk is a fifth-generation family firm which was started in the port of Scheveningen as a herring business in 1880 and expanded during the late 20th century into catching, farming and processing other types of fish and seafood and selling internationally.

The company, which has an international workforce of more than 2,000, approached HETA earlier this year after hearing about the marine engineering apprenticeship which has been developed by the training provider in partnership with Hull Trinity House Academy.

Four learners were originally selected by Cornelis Vrolijk and a fifth who went along because of her interest in marine engineering has now also been recruited.

The five spent two days in Ijmuiden meeting the company’s management team, visiting cold stores and maintenance sheds, meeting the chief engineer and skipper of the Frank Bonefaas and completing a tour of the vessel from the engine room up to the bridge.

One of the learners, Joe Margarson, said: “The trip was very successful and gave us a very good understanding of the company and what we will be working on. All the Cornelius team were very welcoming and as excited as we were. The trip made me realise what a great opportunity I had.

“The experience has really made me want to start straight away and see what it is like when we go out on a voyage. I cannot wait to meet the rest of the team.”

Connor Rawson added: “To get a look around the ship that we will be working on was brilliant. The engineers who gave us a tour round were very helpful and told us all about the skills we would learn during our apprenticeship.”

Tegan Finnerty, who was the late addition to the crew, said: “The trip was amazing and I was so pleased to be given an opportunity to then interview for a position with the company.”

Charlotte Hogben, Training and Development Advisor at HETA’s Hull centre, said the learners finished at HETA in July and will spend the summer completing all their sea survival tickets before making their first trip in September.

She added: “On board the Frank Bonefaas they were able to relate the equipment back to the skills learnt at HETA which included fluid power, fitting and maintenance. They also learnt about the level of safety required at sea and the steps Cornelis Vrolijk have put in place to look after them. They looked at the social side of life on board, the cabins and break areas and then learnt about the progression route within the organisation.”

Other apprentices are hopeful of securing places with trawler and tug operators in the UK, and more are being recruited by HETA and Hull Trinity House Academy to start their training in September.