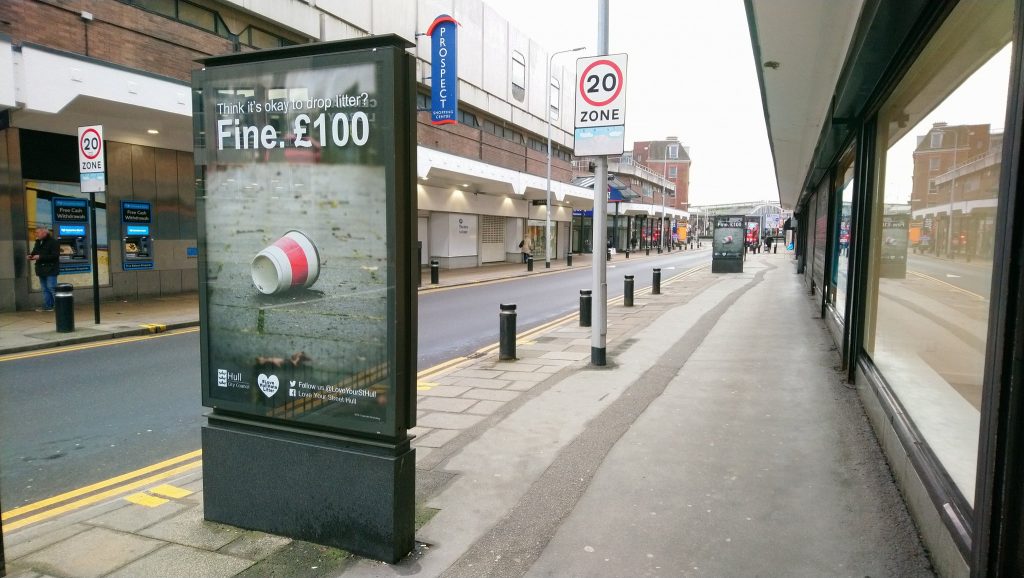 Hull City Council is clamping down on those who litter the city’s streets, enforcing fixed penalty fines.

Increased litter enforcement will be carried out in the city from today, Tuesday 7 January.

Doug Sharp, Head of Waste Management for Hull City Council, told HULL IS THIS: “We have engaged with a company called Local Authority Support Ltd, they are a company that provides enforcement support. What they are going to be doing for us is to provide a team of eight enforcement officers and a team leader to patrol the city seven days a week, between 7am and 7pm, actively issuing fixed penalty notices for littering, and for dog fouling as well. Litter is any item of rubbish in the wrong place, that could be a cigarette end, it could be a piece of chewing gum, it could be a cup, it could be a piece of fast food, it could be a banana skin or an apple core – just because it’s degradable doesn’t mean it’s not litter.

“We will target resources where there’s litterers, so that means the busier areas, the city centre, shopping areas. We estimate 75-85% of the time those areas will be covered, but we also have a minimum provision of 15% in all wards across the city, outside of the busier areas, we don’t want it to be just city-centre focused, we want there to be a deterrent in other areas as well.

“We have watched other local authorities trial this, we’ve seen how it works. We’ve always enforced, last year we did 200 fixed penalty notices, but we can’t do it on the scale that this contractor can do it, and they can do it at a zero risk to the council, at low cost, and indeed we should get some revenue as well.

“We can put that [revenue] into more education, enforcement, fly-tipping campaigns, more bins. We don’t know what we’re going to get yet. We already do loads of education, we spend £2million a year cleaning the city, the one thing we don’t do so much of is the enforcement, so that’s why we’re beefing-up that side of the operation now.”

£100 fixed penalty notices will be issued by litter wardens provided by Local Authority Support, but these will be reduced to £80 if paid within seven days. Fixed penalty notices will only be issued to adults over the age of 18. It is estimated that between 5,000 and 7,000 fines will be issued in one year, with any revenue received by the Council being reinvested into environmental services. The local authority spends more than £2 million on street cleaning and fly-tip removal every year, collecting more than 4,000 tonnes of rubbish in the process.