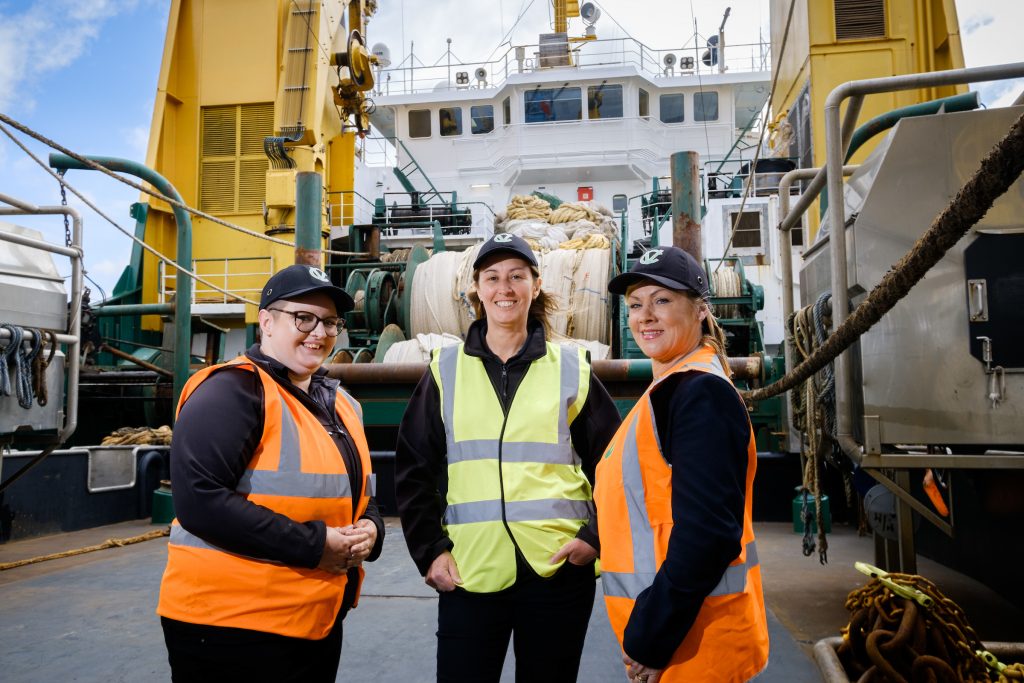 Charlotte Hogben and Jo Lawson of HETA aboard the Frank Bonefaas with Helen Clynes.

A newly Hull registered British freezer-trawler welcomed prospective apprentices and employers as it showcased exciting new marine engineering opportunities on a two-day visit to the city.

North Atlantic Fishing Company Limited, the owner of the Frank Bonefaas (H-72), confirmed that the training courses set up in partnership with organisations including Humberside Engineering Training Association (HETA) and Hull Trinity House Academy, are already attracting interest from other maritime businesses in the region.

Charlotte Hogben, Training and Development Advisor at HETA’s Hull site, said the rising demand will result in setting up a dedicated marine engineering team for the new academic year starting this month.

HETA ended the last academic year by securing places for five engineering apprentices with North Atlantic, and none of the three young men and two young women had a career at sea on their radar when they began their training in September 2018.

Charlotte said: “They began in the same way as all our apprentices, working on electrical and mechanical, and on fabrication and welding, and they all had their own dreams and ambitions.

“That changed when discussions progressed with North Atlantic and the marine engineering apprenticeship came together. We had a lot of initial interest among our learners and we made them complete a lot of independent research so they would know what they were committing to. They have had to prove themselves and now they are excited about going to sea.

“We already have two from a major Hull-based company who will become marine apprentices this month and for the new term we have a dedicated team of marine learners. It is a new development which has come from this project.” 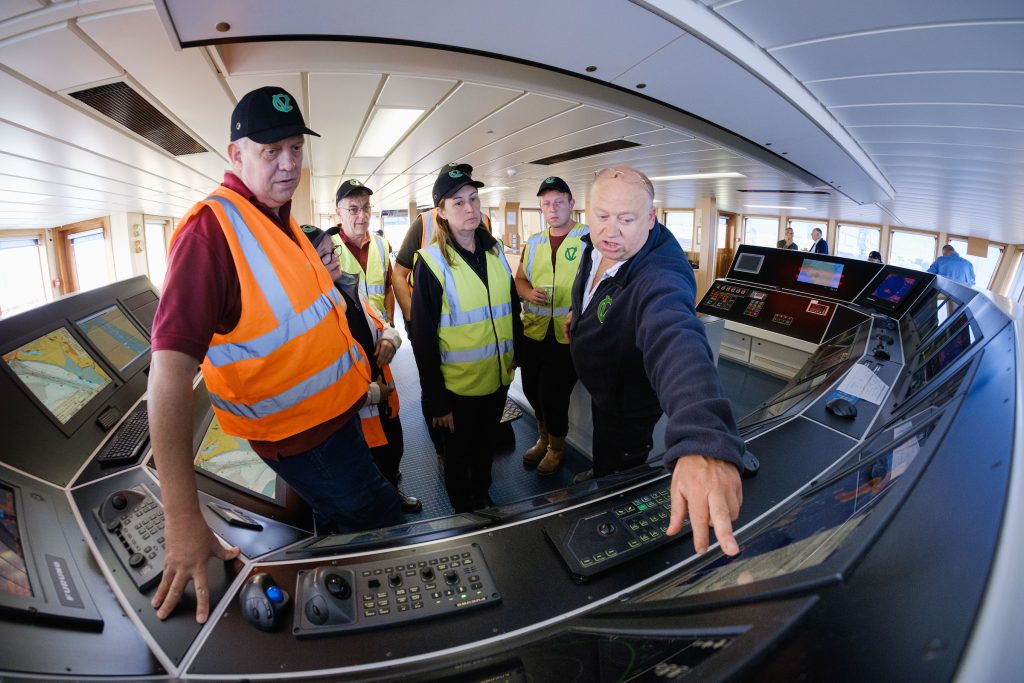 Visitors from HETA touring the bridge of the Frank Bonefaas.

North Atlantic, a subsidiary of the Dutch Cornelis Vrolijk Holding BV, recruits the crew for their fishing vessels from the Humber region. At least half of the crew on the H-72 is British.

As soon as the last of the visitors left the ship, the vessel embarked on a trip to catch herring off the coast of North East UK.

She said: “We could recruit from anywhere but it makes sense logistically to focus on the Humber area because there are strong maritime and fishing traditions here and good links between our operation and other companies in the area.

“Our vessel is very advanced and we needed a technical training centre that both we and Trinity House could rely on. We visited HETA and were very impressed. We will take five apprentices from HETA in September and in readiness for that they have been undergoing obligatory medical examinations and basic safety training.

“They will work for a trip on and a trip off and they won’t know when they set off how long they will be away. Most trips, however, take between two-and-a-half and three weeks. After two years they will apply for their Certificate of Competency from the Maritime Coastguard Agency (MCA).

“We decided to bring the H-72 Frank Bonefaas into Hull to give authorities, schools, training centres, Trinity House and HETA a chance to visit the modern fishing vessel. We also invited the families of the fishermen and they have all used the opportunity very well. It’s been very busy.”

Jo Lawson, Deputy Chief Executive at HETA, said: “This project is putting HETA into another sector which is a new area for us but a traditional one for the Humber. For young people to step into this career not only as engineers but as officers is a fantastic opportunity. Charlotte has excelled with the speed of developing this project and this opportunity, and it shows how flexible and responsive we are as a business.”