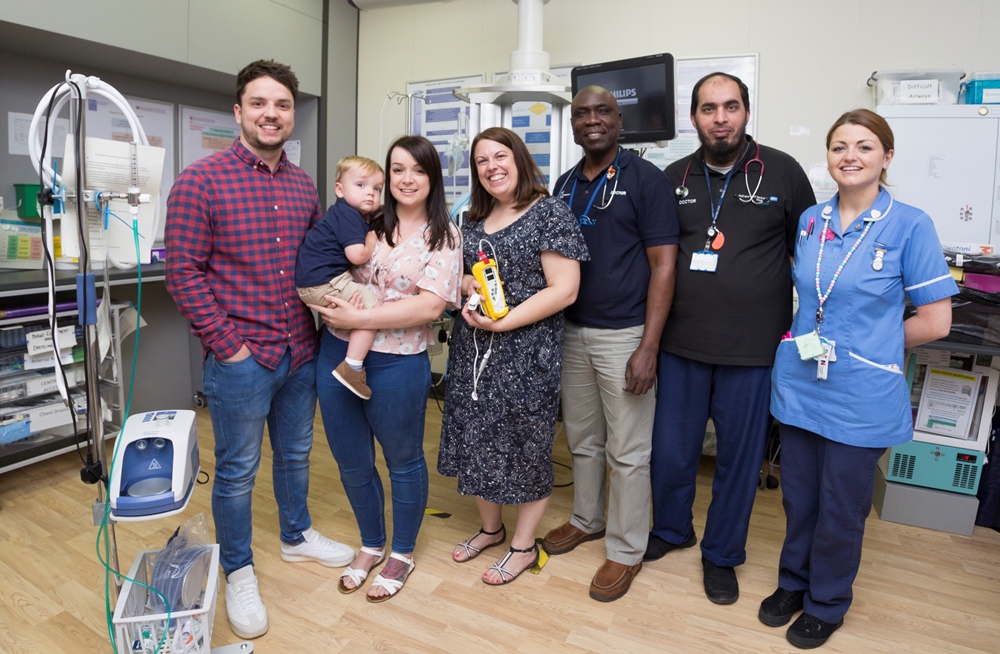 A mum who took part in a sky dive to raise funds for two breathing machines that saved her baby son’s life, officially presented the equipment to the Children’s Emergency Department along with a SAT’s machine, toys and games for patients, plus DVD players, DVD’s and jigsaws for children of the High Dependency Unit who also cared for her son.

Lindsay and Lee’s son Ollie, now 22 months, was rushed to hospital in November after he contracted bronchiolitis and was struggling to breathe.

He started to go blue and went limp in Lindsay’s arms before an Airvo machine, then on loan to Hull Royal Infirmary, was brought into the department to help him to breathe.

Once Ollie recovered, Lindsay and her partner Lee Farndale decided to embark on a fundraising campaign to buy two Airvo machines for the department.

She said: “Experiencing first-hand the benefits the equipment made to Ollie, we wanted to raise enough money to buy at least one machine which we know will make a big difference to other children.  Our fundraising exceeded expectations raising £3,770, allowing us to buy all the amazing extras.  I would like to thank everyone who supported us with a special mention to my close friend Anushka McCann who not only helped us raise more money but who was also by me side doing the sky dive.

“It is fantastic to be able to know that we can try to help entertain sick children with toys and DVD’s which made a massive difference in helping occupy Ollie whilst he was in the High Dependency Unit. 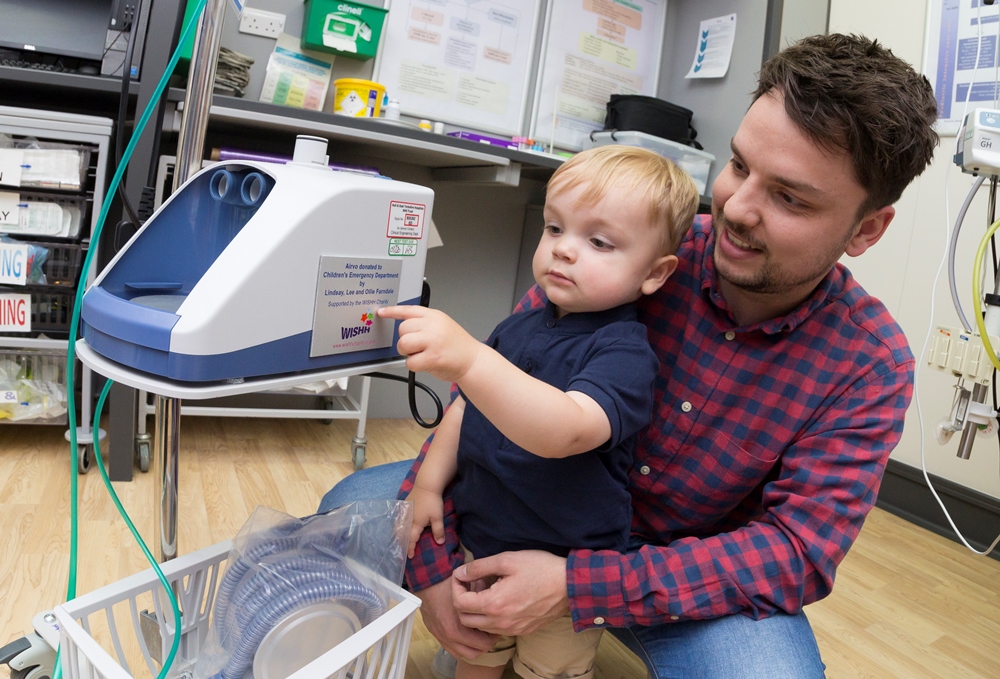 Ollie and Lee pictured with the Airvo machine.

She said: “The team in the Children’s Emergency Department are incredibly grateful to Lindsay for all her hard work raising money for the Airvo machines.

“These machines can help prevent the need for babies and children to be put into induced comas and onto other breathing machines such as ventilators.

“More families will now be able to stay in Hull rather than see their children transferred to intensive care units in other cities thanks to Lindsay’s desire to make a difference to the lives of other children.”

WISHH is the independent charity supporting Hull’s hospitals by providing “added extras” for patients such as equipment, facilities and services which is not already funded by the NHS. In its first three years, the charity has paid for a reminiscence cinema for elderly patients, a mini Tesla car to transport sick children to theatre and is currently funding the redecoration of a children’s ward at Hull Royal.

Ward 130 and its neighbouring High Dependency Unit on the top floor of Hull Royal care for children recovering from serious illness as Ollie did, acute and chronic medical conditions such as asthma or epilepsy or life-long conditions such as cystic fibrosis. While some children can be on the wards or High Dependency Unit for days, others can spend weeks or months undergoing treatment and the gifts provided by Lindsay, Lee and Ollie will make a great difference to the children who are cared for on the ward.

If you would like to become involved in a fundraising campaign or activity like Lindsay to support our hospitals, get in touch with Lisa Whitton of the WISHH team on 01482 622299 or email WISHHcharity@hey.nhs.uk