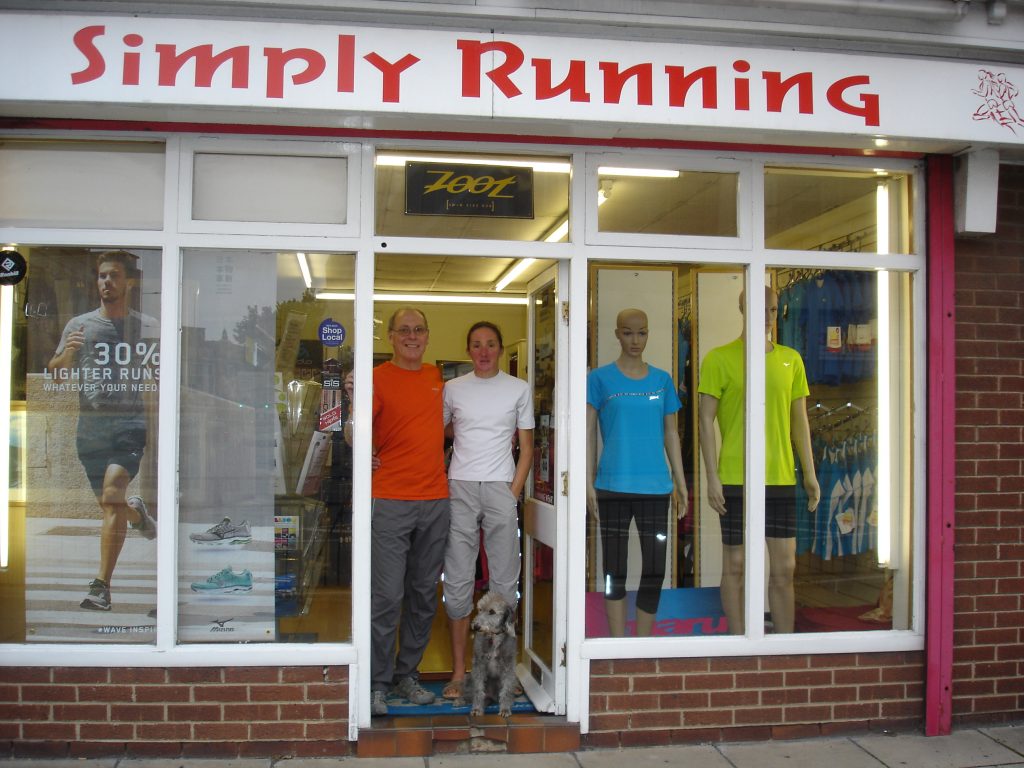 Lockdown fitness fans are being seen as the future for a city centre business which has been a front runner in supplying sports kit, accessories and essential advice.

But the couple who have built up Simply Running over more than 18 years won’t be there to share in the success having agreed a deal to sell to another member of the region’s athletics community.

Kevin Hayward and his wife Melanie will close the doors of the shop in Albion Street for the final time this week. They are planning to relocate to Scotland, taking shop mascot Maisie the Bedlington Terrier with them, and pass the baton to Karl Holmes as he makes his own career change.

Kevin said: “I genuinely believe that when the restrictions are lifted there will be a percentage of people who go back to their old ways but there will also be a lot who carry on with their exercise.

“There are a lot of runners out there at the moment and that’s a great positive, people out running and cycling, families out walking together which was almost unheard of just a few weeks ago.”

Kevin served in the Army and then worked with a print company before redundancy prompted him to open the shop in 2001. Melanie works in accounts for Kildale Marine and looks after the financial side for Simply Running.

The couple met through running and were married on the Isle of Lewis in 1995 after completing the island’s half-marathon. As experienced runners, in addition to selling kit they also advised and encouraged customers of all abilities and experience with help on training, nutrition, injury treatment and prevention.

Maisie made her first appearance in the shop more than 13 years ago and also joined the couple on their runs before she retired.

Kevin said: “We picked her up on a Sunday, she was in the shop on the Monday and there have been times when people have only come into the shop to see her! There was an old lady who used to do that and a student from out of the area who came in because she missed her dog at home.”

Another aspect of the business is taking stalls to events, and it was the New Year’s Day 10k in Cleethorpes that set the sale of the business in process. Kevin mentioned that  it would probably be their last appearance at the race and that news reached Karl, a member of Cleethorpes Athletic Club, and his wife Carol, the club’s treasurer.

Karl said: “I used to work as a healthcare assistant at County Hospital in Louth but I have been a regular runner for a number of years . I was interested when I heard Kevin was looking to sell the business and I’ve ended up buying it!”

Karl will firm-up his plans for the opening once the lockdown situation becomes clearer but Kevin is confident he will hit the ground running.

He said: “We would like to thank all those customers that supported the shop and made it such a happy time for us. Seeing the progress of so many people over the years who, at the beginning, did not think  they were able to run but who managed to get themselves up to the 5k Park Runs and beyond gave me the most joy. I would like to think that the encouragement and advice we gave them helped in some small way.

“Karl is certainly enthusiastic and I think he will reap the rewards of a boom in the fitness activities so would like to wish him every success with the shop. We’re looking at moving to the Outer Hebrides, Lewis, Harris or maybe the west coast or Highlands. It’s got to be a good place for running, walking and cycling!”

Kathryn Shillito, HullBID Executive Director, said: “We can only thank and congratulate Kevin, Melanie and Maisie for their success at Simply Running, which is established as one of the city centre’s great independent businesses.

“We wish them all the best with their move to Scotland and we look forward to supporting Karl and introducing him to the city centre business community.”