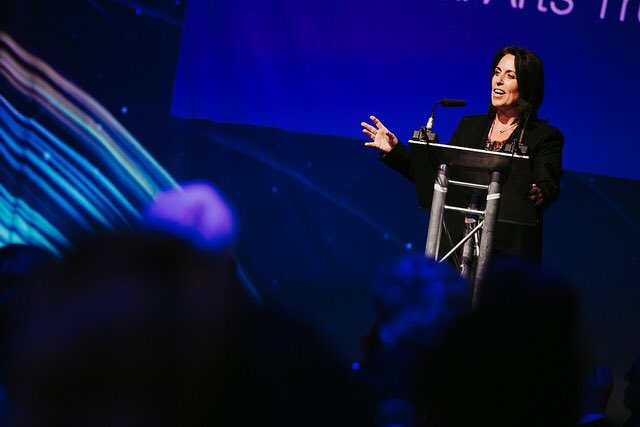 The easiest question to ask Jenny Howard Coombes – her favourite performer from seven Freedom Festivals? – would probably be the hardest for her to answer, and among the least relevant.

So we skipped it, chatted generally about arts and culture in Hull and the surrounding area and inadvertently ended up there anyway.

“We always, always get so many artists after a festival who ring us or email us to say how extraordinary the audiences were and how they connected with them, and that says so much about my experience of Hull.”

Specifically, Jenny recalls the reaction of the audience – and the response from the performers – when an Australian circus company stepped into the Big Top in 2018.

“It was full to capacity with about 400 people. Some had never seen anything like that in their lives and the atmosphere was electric. The young company of artists trotted in, lined up on stage and smiled and the audience all stood up. The company said it was the best experience of their lives. They had never had that kind of welcome anywhere.

“It was a reverse. Often the audiences will sit there and wait to be embraced. But in Hull our audiences are so generous.  It’s not that our audiences don’t want to be embraced or don’t deserve to be embraced, they do, but equally they want to give back and it always feels like they connect with artists  in a way that says ‘Welcome to our city, we want you to have a ball!’ ”

As Jenny heads to a job with National Trust for Scotland in its new corporate partnerships division, she will take with her indelible memories of the people she met in Hull, from those audiences to the colleagues, performers and various supporters who have done so much to establish the Freedom Festival.

“It’s an emotional one. I’ve met so many people who have just stood up and grabbed everything and ran with it, and you don’t get that everywhere.”

It’s clear from the response of people who heard about our lunch at 1884 Wine & Tapas Bar that the feeling of admiration is mutual. Twitter was abuzz with tributes. A prominent business figure reminded me to pass on their own lunch invitation. Jenny voiced concern that she might double in size during her final month in Hull. She’s in demand and we’re grateful to her for her time, and to 1884 Wine & Tapas Bar for hosting.

Jenny arrived in Hull in 2012, got the job with Freedom a few months ahead of the 2013 Festival and set about making it different.

“We determined that it would become an arts festival rather than just a music festival and we knew we had to find a USP, a distinctive voice. But that was easy because it was here on our plate – it was in the DNA of the city.

“We said over three years we would build the income, strengthen the foundations, cement its position and get to a point where we could bring in our own team to fully promote and present a festival, and we achieved it. Hats off to the board who had the vision, commitment and work ethic to make that all possible.”

The trick was to move the programme away from popular music and expand the broader arts offer in a way that would retain existing audiences and connect new audiences, still delighting and enthralling the crowds which were a factor in the launch of The Wilson, the gastrobar which opened nine years ago at the south-west corner of the marina, and which evolved into 1884 Wine & Tapas Bar.

Deborah Spicer, Director of the restaurant, remembers arriving at work in September 2010 as they were fitting out The Wilson ready for their own opening the following month. She said: “The area was packed and it was a struggle to get to our own front door! We knew then that we were in the right place and we’ve been here ever since.”

But even in a place which is still, technically, UK City of Culture for a while yet, there’s evidence of diminishing private sector investment into the arts combining with an increasingly challenging funding environment at a time when the demand, appetite and expectations have risen and the opportunities to effect long term change are boundless.

“Perhaps that’s to be expected after the big bang of City of Culture, but now’s the time when we can really begin to pave the way for durational transformation so it feels a little back to front.

“No doubt the fanfare of City of Culture emboldened businesses to invest in 2017 but perhaps, a different conversation was needed at the beginning to look beyond 2017, to understand that real change would be made possible through sustained investment over 10 to 15 years. It’s difficult for the businesses to report that to shareholders, but what business isn’t already looking 10 to 15 years ahead these days?

Coming from a commercial background, Jenny has been able to develop an offer to businesses which extends beyond offering branding in return for cash.

“Whilst many organisations have ambitious CSR programmes, they still have other significant areas of uncertainty and many have shareholders who want to see their dividends grow. Articulating the long term benefits to business, tangible and intangible, of a vibrant and diverse arts sector remains a challenge, but it shouldn’t be so hard given the transformation of the city and its communities to date.

“We’ve benefited from good support from a number of businesses, with many of our sponsors investing with us for over six years. That commitment has been invaluable, allowing us to project forward, build momentum, seize the opportunities opening up. Our relationships with our private partners are about more than just investment. We see and explore opportunities to innovate, to elevate each other to test out new creative ideas, support talent development in the city and much more. Collaborating with the arts is too often seen as a hand-out or brand opportunity. But the forward-thinking organisations can be much more than that. They can be about innovation and prosper-led growth.

“There has been a massive contraction. That’s not a criticism. I get it, but there has to be an understanding that it has to be a united front and that one-off investment in any form for any business doesn’t pay dividends. It’s like investing in a big piece of R&D work, saying how brilliant it is and then cutting it the next year. I do think that the arts sector needs also to get better at exploring more meaningful, ambitious industry partnerships that are innovation led. It’s hard to do that with a hand-to-mouth funding model but that’s even more of a reason to push the boundaries.”

We talk about why businesses should bother, why Hull was selected as one of only nine centres nationwide for the launch during 2017 of Creative Health – the All-Party Parliamentary Group Inquiry report, and why the answers are obvious.

“The arts and culture have an absolutely vital role to play in building a city where people can thrive. We need great arts and culture and we need creativity back on the curriculum, supporting teachers and allowing creative output for children.

“But the arts and culture offer of a city is just part of its critical ingredients. We need more business investment and the growth of entrepreneurialism. If you look at cities where there is a high output of entrepreneurialism, the vast majority of business leaders are creative leaders. They are not necessarily academics, they are visionaries, people who imagine the unimaginable, and that’s where the healthy, vibrant cultural offer can inspire and allow those kids who are not necessarily academic to find something for them to champion. You get that next generation stuff happening and anything is possible.

“It’s about the health and wellbeing aspects as well. The arts is not a panacea and can’t fix everything on its own and nor should it. But without question it has a role to play.

“If we want to change and enhance our society, we have got to find ways to get education and health and the arts and industry all properly working together.”

We could have gone on. There’s no end to this subject, but we had no room for dessert, and no desire to nod off during our afternoon meetings. We finished with a couple of questions which may be obvious but which needed asking.

“It’s been an absolute gift of a job and it will never ever be replicated. It would be very easy to stay for life.”

And any tips for whoever succeeds her at Freedom Festival?

“Dig deep, get on it, put people first, don’t moan, step up, step out and make it bloody count. It’s worth it.

Phil was talking to Jenny over lunch kindly provided by 1884 Wine & Tapas Bar on the marina.

Be the first to comment on "Parting Freedom Festival director reflects on 7 years of generous audiences, the arts, and the DNA of the city"