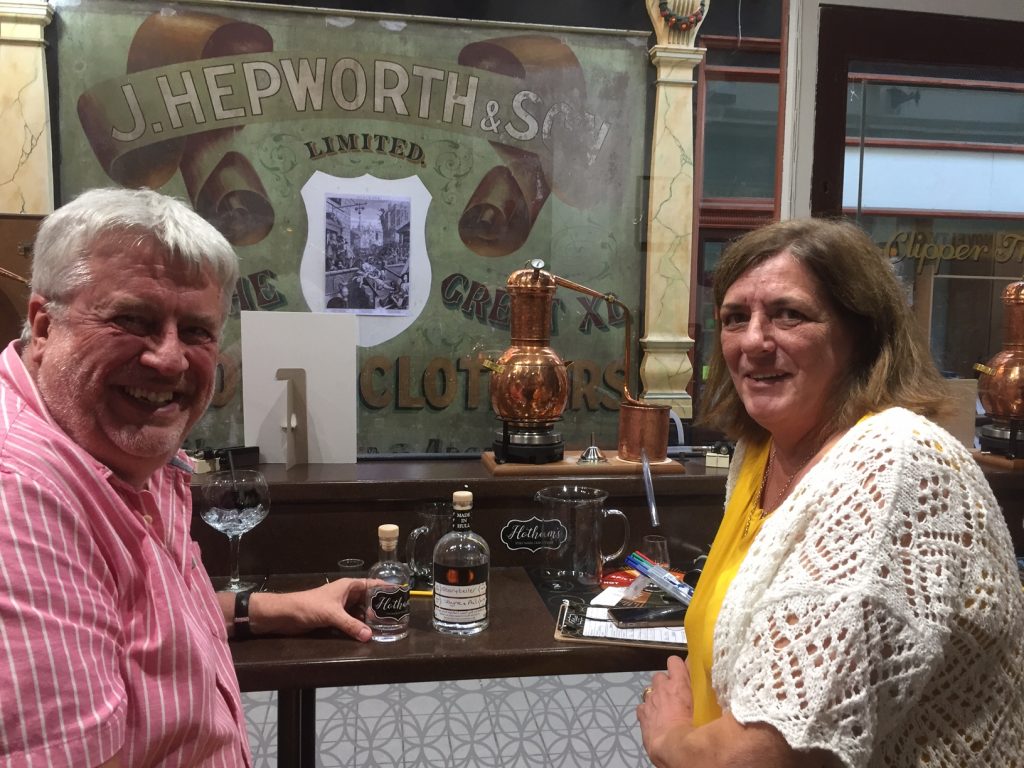 We found it easier to think of names for our kids. There are books to flick through, friends to consult and obvious disasters to avoid. Such as, who on earth would call their offspring Boris and expect all to go well?

But naming your own, hand-crafted bottle of gin is something else. Especially talking through ideas when surrounded by strangers and shimmering copper stills in Hotham’s compact distillery. We can’t name it after the cat. We always do that. Calling it Fudge would be, well, a fudge. And a text to our daughter was pointless.

“Call it Amber”, she replied.

She would. It’s her name. But you can’t go branding alcohol after your 16-year-old. Especially when the tipple is clear rather than amber, and when our Amber has obviously never touched a drop. Possibly not the biggest fib of the afternoon, but definitely up there.

The list of attractions which compete with football for Saturday afternoon leisure time is growing and may well be a matter for a future piece. But with City at Luton it was easy to opt for an afternoon at Hotham’s Gin School. Learn about gin, drink gin, make gin, take home your own gin. And before anyone says they don’t like gin, be warned that the standard response from Emma and Simon is that you just haven’t found the right one yet.

The sessions last up to about four hours. They’re not cheap but when you add everything up they’re definitely good value and great fun. A tip – if you’re planning to book in, start thinking now about a name. We decided to await gin-spiration. Which I now realise would have made a great name.

We heard about the science and the history of gin, with more tall tales from our hosts. Like the real reason why Sir John Hotham refused to allow Charles I into Hull. Not the sort of bus-adorning whopper that could change history, but a tweak of the truth, a re-interpretation of our heritage which became a little more plausible with every sip.

We’d started with a health and safety briefing. There’s a fair bit of glass about. The stills get hot, that’s how they work. The loo is at the top of a typical Old Town staircase. The more gin you drink the more likely you are to need to make that climb, and the steeper it becomes.

We are advised there is a more accessible alternative in a nearby building. Please don’t say it’s next door, in Dinsdales joke shop, where cling film-related pranks are sure to form part of the repertoire.

And then to the gin-making, and the Hotham’s Gin School wheel of fortune. Too many spokes to count, each of them a potential ingredient, or “botanical”, to flavour your creation. How rash would it be to stick a pin in the middle, spin the wheel and let fate decide whether wormwood, tonka and oregano work well with eucalyptus, chilli and geranium? And what’s rooibos anyway?

Weigh them, measure them, pour them into one of the stills, which are all named after famous Hull connections. We got Courtenay. Others include Godber, Heaton, Marvell, and a bigger one, Viola, after the trawler which inspired one of the distillery’s branded gins.

News filtered through from Luton that City were winning. The suggestion that we call our gin Kevin Stewart, after the goal scorer, was kicked into touch.

We sit, sip, listen, sip, chat, sip as the still works its magic. Inevitably we attract the attention of the passers-by as they wander through Hepworth’s Arcade and wonder what you’re up to. We smile back, wave at a well-known writer who is making frantic drinking gestures, and then catch a glimpse of a display in a shop just across the way. How about sherbet lemons or strawberry bonbons in the gin?

With every drip from the still the tension mounts. The gin tastes very promising, with all the zing, citrus and fruitiness promises by the wheel of fortune. But we still haven’t got a name. Jayne sneaks a peek at the gin school notes from the couple next to her on the bench. “Ripper Gin”. What’s that about?

The schoolboy in me thinks back to Simon’s quips about Dinsdale’s and to the hot, spicy and earthy sectors of that tasting wheel. But the creator of that particular brand is none other than historian Mike Covell, something of an authority on Jack the Ripper – the legend, the books and, now, the gin. 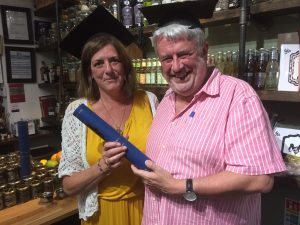 As the session concludes with gin school graduation photographs, we finally decide to name our liquor “Storyteller Gin” as a nod, and perhaps an aide-memoire, to some of the alternative facts aired during the afternoon.

And then we check the final score from Luton…

“What do you mean City won three nil? Have you been drinking?”

This is not a commissioned article, it’s Phil’s personal account of a visit he’s enjoyed. If you have similar reflections of your visits to other Hull ventures, share them with us.