Another column from Cott. But for coronavirus it would have been a bulletin from Beijing. The view from the window wouldn’t be Hull City’s training ground but the Bird Nest Stadium and the Water Cube.

The flights were booked and the excitement was building as leaders of sports governing bodies from around the world looked forward to SportAccord Convention, the annual convention which is a major influencer on sports ranging from track and field at the Olympics all the way to… erm… cheerleading.

But in February the event was moved to Lausanne, home city of many of those sports federation, and in March it was cancelled altogether.

Whether you realise it or not, the conference sessions are likely to have an impact on most of the sport you play or watch. SportAccord is also important to one of Hull’s lesser-known media organisations.

For about 10 years Squires Media, based in the Avenues, has held the contract for producing The Daily, the glossy official newspaper of SportAccord Convention, packed with news, insight and event listings for the week and put together by a team of half a dozen journalists, four of us at the event and a couple more supporting us from their desks in Hull and Pocklington.

In 2008 I led the Press Association delegation to SportAccord in Athens. Since 2013 I’ve joined the Squires Media team in such exotic locations as Saint Petersburg, Bangkok and last year Australia’s Gold Coast, going back to my journalistic roots to spend hours on end in conference sessions or hanging around outside meeting rooms to grab a quick interview with the likes of Thomas Bach, President of the International Olympic Committee.

It attracts global media attention because it’s the only gathering which brings together the decision-makers behind the big, multi-sport events. There’s an association to represent the interests of all the sports which feature in the Summer Olympics, and their general assembly this year would have run the rule over the facilities at Tokyo 2020. It should be straightforward, but a year ahead of Rio 2016 there was talk of moving it.

There’s another association which looks after the interests of the sports in the Winter Olympics, and there are more which strive to gain recognition and Olympic inclusion for emerging sports. That’s how things like skateboarding, sport climbing and surfing get selected.

Drugs and match-fixing are high on every agenda, as are the questions of how to develop sport in an increasingly congested calendar, and how to build interest in the face of competing activities. E-sport is recognised as a thing, and that raises issues among the growing number of lawyers charged with looking after the intellectual property and integrity of sport.

Inevitably, politics comes into play. Arriving early for a press conference with Lord Coe in Turkey in 2014 there was a chance to talk privately and set some parameters. As Chair of the British Olympic Association did he fancy talking about the implications of the Scottish independence referendum which was due a few months later? Not a chance!

But we’d met before in planning sessions for London 2012, and way back when the gym at the Mercure Grange carried his name and as we chatted he volunteered his thoughts on the big Hull story at the time – the attempt to rename Hull City. I sent his quotes back to our mainstream media but they were never printed or broadcast.

He said: “Football clubs do have a heritage in local communities and you lose that at your peril. For many people, sports clubs and football in particular are often anchor points in the lives of the local community.”

A year later we travelled to the Olympic park at Sochi, venue for the 2014 Winter Olympics, a few games in the 2018 World Cup and the Russian F1 Grand Prix. As the only journalist in the room I scribbled my shorthand as President Putin spoke of his plan to rebuild the Russian economy by promoting sport and healthy lifestyles. We’re due in Ekaterinburg next year so maybe we can ask him how that worked out.

With early starts and late finishes every day, the social side is low key for most of the week. 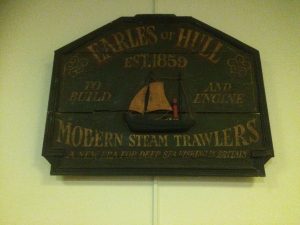 In Saint Petersburg we managed to find probably the only Irish sports bar in the world that wasn’t showing that night’s football match between England and Ireland. In Sochi we found live Premier League football at an Irish bar in one of the big hotels, so Irish that they had a sign for Earles shipyard in Hull.

Arriving in Aarhus in 2017 we were delighted to find a bar showing live coverage of Hull City’s home game against West Ham United, but less thrilled to discover it was the headquarters of the Aarhus Hammers. Thankfully they responded well to a rare City victory.

Across the street we found a wonderful German bar and more hammers. At closing time the bar staff would hand out six-inch nails and lead drinkers in various states of inebriation to a tree trunk in the corner of the bar. After a couple of taps to put your nail in place, you then took your turn to try and hammer it home. There were no prizes but the participants – I declined – confirmed it was the best way to get your head together for the walk back to the hotel. We named the game Nailhammer, and we’re determined to get it into the Olympic schedule.