The look on the photographer’s face was of rather more than surprise as he gawped and gasped: “I thought you were in Bermuda?!!!”

I had been, and I was heading back there, but for three weeks I was on a festive break in Hull and, after one thing led to another, here I was in Hull Prison.

It’s not what you think. It’s not how it looked. There was a band I desperately wanted to see before I headed back to warmer climes, and the only way to do it was to basically break into Hull’s biggest hotel, the one on Hedon Road.

The latest reminder came over the weekend when I spotted a tweet from Russ Litten announcing the debut album from Oceaneers. I’m listening to it as I write this and it’s faithful to the Bandcamp blurb about “a cinematic blend of Americana, psychedelia, dark ’60s European pop and ethereal folk”. 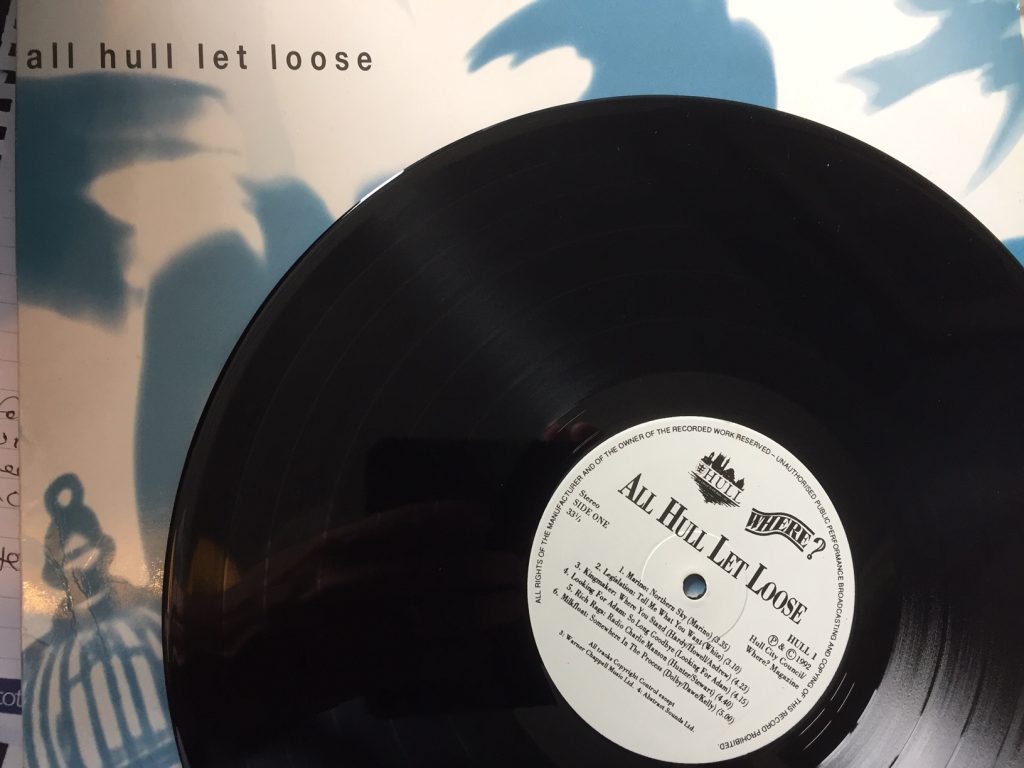 I’m about to listen to “All Hull Let Loose”, a slab of vinyl from 1992 which features a dozen tracks by some of the city’s finest bands at the time. I’ve also got a cassette tape with a few tracks by Tombstone Graffiti. How does this fit together and what does it have to do with Hull Prison? We’ll get there.

So the blurb for the new album, “Light of the Whalebone”, leads us into something of a who’s who of the local and regional music scene. I’ll stick to the people I know.

Keith Angel, who plays percussion on some of the album and jointly runs the Sweet Factory studio in Louth where it was recorded, should have found fame with No Man’s Land, a bouncing rock band from mid-1980s Doncaster.

Visits to Hull were rare – hazy memories of an Adelphi gig – but they headlined a bill which also featured the Gargoyles, who left the audience gobsmacked with a trademark madcap show at the Hot Tub Club, a weekly session in a side room of the town’s swankiest nightclub.

No Man’s Land also made their mark at a festival in Scunthorpe headlined by the Housemartins and covered by me for the Yorkshire Post. There’s a cutting round here somewhere that might make an appearance in the coming weeks and months. More recently Keith co-produced some terrific work by In Fear of Olive, a Doncaster band who evolved into Laurel Canyons and made frequent trips to Hull.

But it’s Oceaneers who are of particular interest. John Parkinson, Russ Litten and Simon Bristow were three of Looking for Adam, a tidy Adelphi band from the 80s. The most remarkable credit for “Light of the Whalebone” is accordion by Jim Parkinson, John’s 82-year-old dad, who apparently was very nervous about the whole recording session but nailed it in two takes.

Looking for Adam made it into the 90s and contributed “So Long, Goodbye” to that 1992 compilation.

It was a remarkable record put together by Tim Joseph with help from Chris Warkup and funded by Hull City Council. Tim had launched Where? magazine the previous year, was acknowledged as a stalwart of the local music scene and fully-deserved the warm tributes which came with a 25th anniversary celebration.

His sleeve notes pointed to a city blessed with much musical talent: “For years, people have thought that nothing ever happens in or from our far-flung city. This LP will help to prove otherwise, including as it does several household names and several acts which could well be so by this time next year.”

Of those, Milkfloat were magnificent and made a big impact with an industrious and industrial style which was never going to crack the commercial market. The multi-talented Ian Beharrell pitched up on the back of a lorry singing the official Coca-Cola song to celebrate the brand’s sponsorship of the Football League. M G Greaves and the Lonesome Too are still around and appeared in the fifth essay in this series.

Formerly with Vicious Circle, Dave Stead joined Paul Heaton’s new band alongside Dave Rotheray and Dave Hemingway – both previously with the Velvetones – in demonstrating the depth of talent in the Hull music scene. When the Housemartins referred to themselves as the fourth-best band in Hull, it’s possible they meant it.

Another candidate for that accolade, Kingmaker, also feature on “All Hull Let Loose”. Word reached me during 1990 about their potential while I was working in Bermuda, and a more enthusiastic than ever Paul Jackson even sent me a demo tape they’d recorded under their working name of Tombstone Graffiti. I vowed to see them on my next trip back to Hull.

Sadly they weren’t doing any Christmas specials and it looked as though the best I’d be able to find was four-song set at the Adelphi. But then someone mentioned they were going to do a longer show, with Looking for Adam as support, for young offenders in the prison. I managed to convince the bands they needed an extra roadie.

The prison governor cleared me to write a review for the Yorkshire Post. He also invited along the Hull Daily Mail, hence my opportunity to surprise photographer Dave Barker.

Reading the review nearly 30 years on reminds me of some of the detail. The young lads in the audience were a handful, showing off and trying to make the gig all about them.

I wrote about Looking for Adam’s patter seeing them through an uncertain opening half hour: “But they persevered and capped a professional performance by giving away copies of their latest single – and set highlight – Sal Paradise”.

Kingmaker “showed their ability with a selection of stunning homegrown rock numbers which draw on only the very best of influences.”

One of the young inmates delivered an impromptu rap, others played air guitar and the review concluded: “More bands are being lined up but there are no plans to bring in comedians to a place which has enough of its own. Asked by Looking for Adam if they had any questions, one prisoner replied: ‘Can you smuggle me out in that big speaker?’”