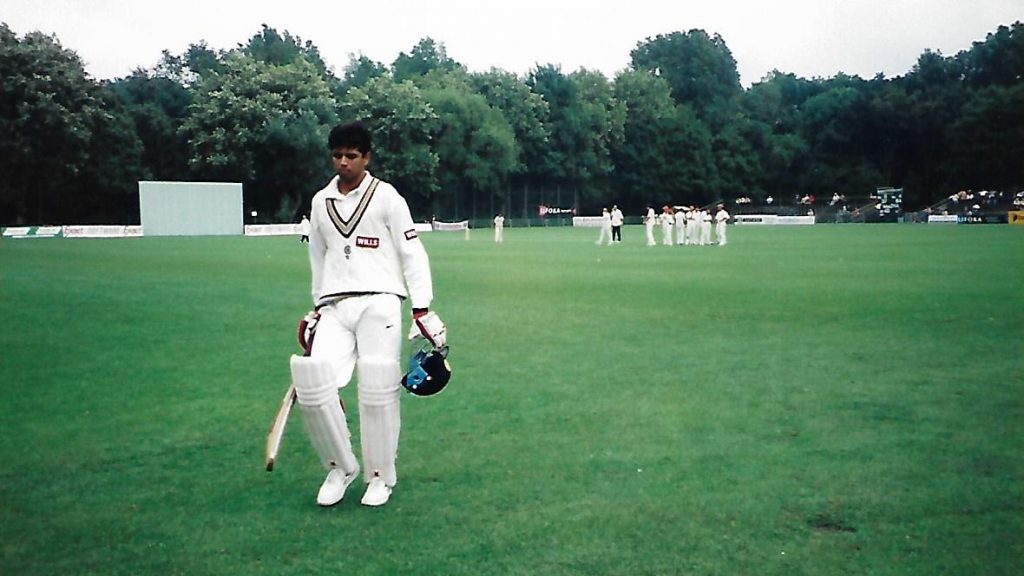 The Indian cricket team followed their 1996 Test series in England with two matches against the Netherlands in The Hague.

It was the day that football stopped play at the cricket – and at Lord’s of all places.

You can still find the scorecards online showing some memorable milestones from the Second Test between England and India in June 1996 but the stats don’t tell the full story and there’s no sign of the colour pieces from the sports feature writers of the time. Maybe they were all at Wembley.

Many observers dismissed the match as a dull draw, and the basic numbers would support that. Too many weather interruptions and a run rate that never got near three per over, but a century for Sourav Ganguly with fellow debutant Rahul Dravid falling five short announced the arrival of two future legends. I saw Ganguly again later that summer when India played in The Hague.

For England, wicket-keeper Jack Russell made 124 and the game mattered to neutrals as well as the 66th and final Test in which the legendary umpire Dickie Bird officiated.

But even with Russell behind the stumps it was highly irregular to see Alec Stewart and his equally accomplished close catcher Graham Thorpe spending as much time as possible fielding a few yards from our seats in the front row of the Tavern Stand. Just like those sports writers, their minds were on Wembley.

The occasion just a few miles across north London was the quarter final of Euro 1996, when the song insisted football was coming home. England had played some scintillating stuff and now faced Spain. Plenty of people would have loved to have been in both places at once, especially as the tension mounted at Wembley.

Technology linked the two iconic venues. Radios were pressed hard against ears that weren’t already plugged with earphones. Stewart and Thorpe weren’t the only cricketers to dwell on the boundary for a second-hand running commentary from the other big match.

And when the football continued through extra time without a goal, the most bizarre scenes of all as the penalty shoot-out put paid to any hope of seeing some meaningful cricket for the next few minutes.

The crowds in the swanky Lord’s executive boxes had their backs to the field and they eyes glued to the TV screens. Stewart, Thorpe and several team mates had given up all pretence and were on the boundary fence. In the middle, the bowlers weren’t bowling and the bewildered batsmen could only down tools and chat to the umpires. What Dickie Bird made of it is anybody’s guess.

The record book suggests that the oohs and aahs came from such notable moments as Sachin Tendulkar being dropped by Graeme Hick in the first over of the day, his dismissal soon after by Chris Lewis and Ganguly’s feat in completing his maiden century. But they were much louder for those penalty kicks as England won a shoot-out for the first time. 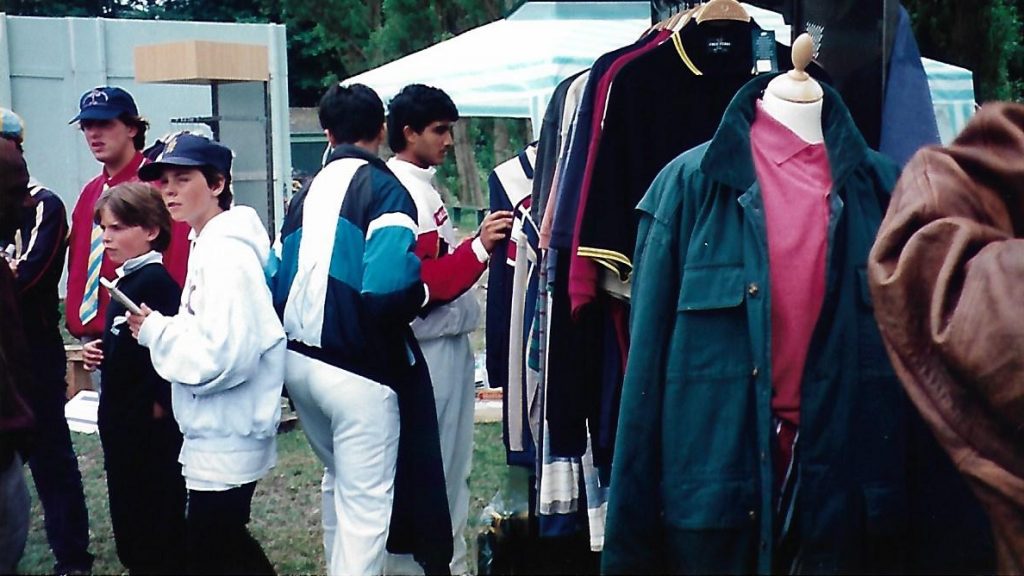 Sourav Ganguly browsing the stalls at The Hague Cricket Days two weeks after the Test match at Lord’s in 1996.

What does it have to do with Hull? Well, three of us made the trip to London, continuing a Test match tradition which began in the 1980s, after Yorkshire had stopped playing matches in Hull. The trips usually took us to Headingley and at their peak grew to a complement of 25 or more setting off early doors by minibus from the Blue Bell in Cottingham and getting back asap after close of play because we’d run out of beer.

Some of the picnics were absolute perfection, and the competition to present the most impressive food and drink was as intense as anything on the field of play. When in 1991 I could only watch the First Test against the West Indies on TV from the office in Bermuda I still managed to identify the tour party in the front row at the Kirkstall Lane end, their location revealed by the sun glinting off the champagne glasses perched on a made-to-measure shelf which was screwed into the back of the perimeter advertising.

My most popular picnic item was the magnificent pork pie sourced from Charters butchers, then in Brandesburton, and presented by a proprietor so grateful for an article in the Yorkshire Post to mark the centenary of the family business. He gave me enough for everybody and I cut it up and passed it round like wedding cake.

The least popular was when I used a warm-up trip watching Yorkshire at Scarborough to conduct a bold culinary experiment and ended up with salad swimming around a plastic tub in a sea of marinated herring.

Vast amounts of beer and wine were consumed, and increasingly innovative schemes devised to smuggle bottles and cans past the security guards who were on the lookout for anybody breaching the four-drink limit. The best was to fill a cooler with the permitted four cans and a bag of ice which was then used to child a full case of beer safely delivered in the boot of a car in the corporate parking spaces. We called it the Trojan Lexus. 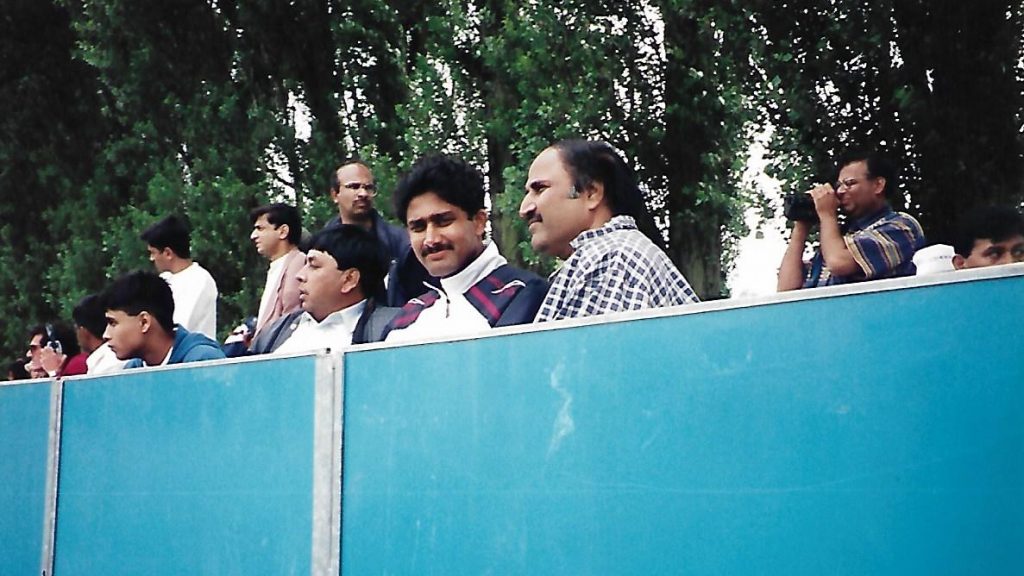 Anil Kumble watching from the stand in The Hague.

The trips continued for more than 20 years. There was only one mishap, and Ganguly again played a part. It was a chilly Friday afternoon, the clouds cast a gloom, the wind was swirling and the player who by this time was India’s captain hoisted a towering six towards our seats in the rugby stand.

I watched the ball move this way and that, and then this way again, putting down my beer and preparing to catch it in my floppy hat. Absolutely no danger of attempting any heroics for the TV cameras. And then it went that way again so I sat down to hear a dull thud, a yelp of pain and gasps from my neighbours. John Bunton, a regular member of our party who sadly died a few years ago, took the ball smack in the middle of his forehead.

He was taken away by the St John Ambulance crew to be patched up and he received an apology from Ganguly, who also signed the ball and sent a policeman to present it.

When we returned to the Blue Bell we saw John on the TV news, eyes closed, arms all over the place, no hope at all of catching the ball. The pub regulars recognised him instantly, and gave him the warmest welcome.

Some of us still make the odd trip to Scarborough and go along to cricket social events, so maybe we need a second innings on cricket in Hull.