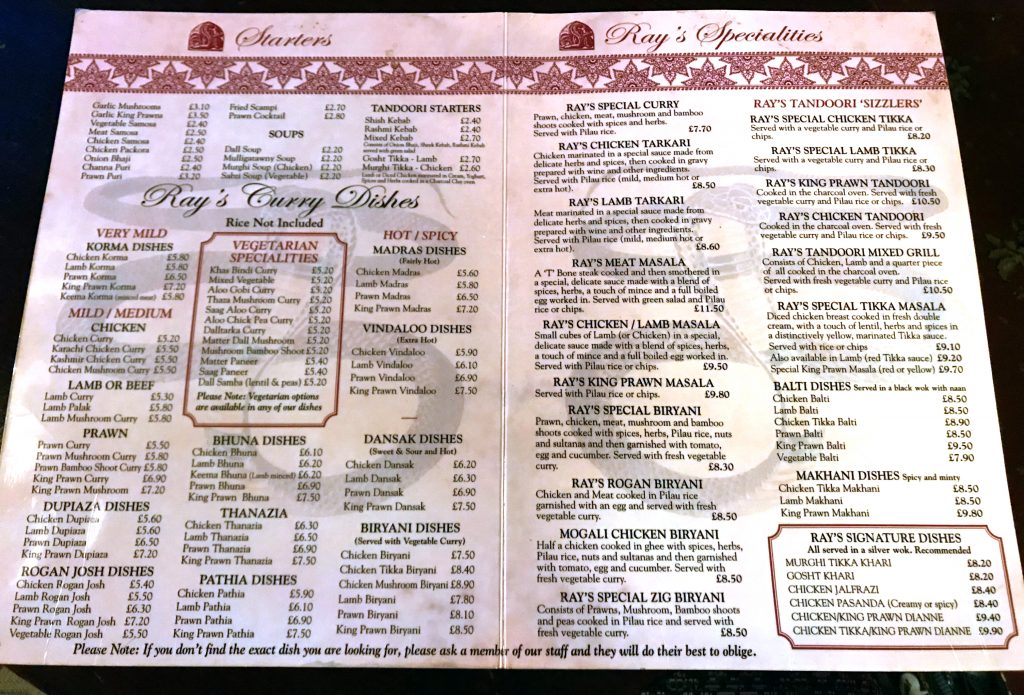 It is famous and notorious in equal measure. Not many people haven’t heard of Ray’s Place. Of those who have, many haven’t ventured through the front door. If they did they’d probably be even more distrusting!

Some of its neighbours were palatial by comparison, and that was long before the swanky additions from the guys at Tapasya. The redevelopment of Princes Avenue brought a plethora of plush café bars and dining options, leaving Ray’s to stand out as a curry house from another place and certainly from another age.

When it reopened about 18 months ago the paper said it had been around since about 1995. Not even close. More recently, in a report of Ray’s passing which was touching and seemed to be well-informed, there was reference to 1982. That could be right but you know what they say – if you remember the early years at Ray’s Place you weren’t really there. 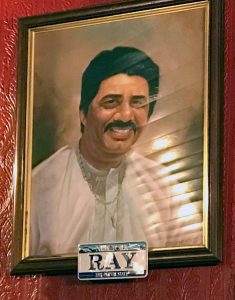 I must confess it’s a long time since I’ve eaten there and it’s maybe a year since I last saw Ray. I was walking past one night when I spotted him through the window and went in for a chat while I waited for a bus.

He’d been ill but was much better, splitting his time between his home in Bradford and the restaurant in Hull which he’d built up from scratch. We chatted about the great nights when hungry and thirsty journalists from the Yorkshire Post and the Mail would descend on the place. Ray remembered the names of those who had left Hull years before, even though their reunion visits have become less frequent.

We talked more about Ruby Tuesday. Every Tuesday for four or five years until 1989 I used to go in with Graham, a time-served traditional sign-writer who painted the cobra image on the front wall. He also, in 1988, painted a massive Carlsberg logo on the garage door of a Liverpool fan after Wimbledon, shirts sponsored at the time by the manufacturers of the over-rated beer, beat the Reds in the cup final, but that’s another story. 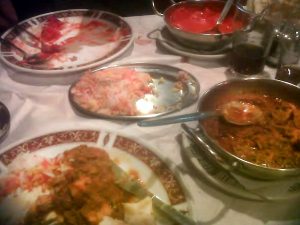 The Ruby Tuesday order hardly ever changed. Meat Madras for Graham, meat curry for me. Pilao rice to share and a skateboard, such was the size of the nan bread. I made a slight variation whenever Neil was with us; on the morning after a Ruby Tuesday a rather unpleasant colleague used to complain about the smell of garlic in our compact office, so we both took to ordering meat curry with extra garlic.

On other visits we were more adventurous, but only sometimes. Once we asked the guys in the kitchen what they ate. They showed us a huge pan of meat and potato curry which was made on a Monday and topped up during the week, so we had some of that and it was magnificent.

We always went there for special occasions. I took Jayne there on our second or third date in 1989. She only told me recently that when I called to say I might be late because I was working on a murder-suicide story she reckoned that was just too far-fetched, I was going to dump her and it would be good thing because I clearly wasn’t normal. The next time was only a few weeks before my move to Bermuda. We met Graham and Sandra, in the Queens of course, and they presented me with a pair of Caribbean – as opposed to Bermuda – beach shorts, multi-coloured but mainly a bright lemon, which I had to wear in the restaurant.

I booked in with a bunch of mates for my stag night a week before the wedding in 1992. And I broke a solemn promise and all the rules about bad breath at the altar by going back again the night before the wedding.

A few years ago I joined Graham and a small group for a surprise birthday celebration for Ray. Sadly, and unusually, the food really wasn’t great, but the next time I went with fellow freelances Jo Charlton and Dave Windass the curry was one of the best anywhere, ever.

Princes Avenue is unrecognisable now compared with the late 1980s when, with the possible exception of Chaplins, the only place you could get a drink between the Queens and the Botanic on Spring Bank was Ray’s Place.

It’s testament to Ray’s reputation that his Place survived the influx of trendy new destinations and will surely survive his passing. Little appears to have changed. There’s a broader range of clientele partly because more people were attracted to Princes Avenue by the bars, and to Ray’s by the bring-your-own booze policy, which apparently has now ended.

There’s also a review website these days which provides a platform for people to praise or pillory at the press of a few buttons, but I always think it’s best to make your own mind up. Graham’s kids practically grew up in Ray’s Place. Mine, rather younger, only know it as a takeaway. We’ll be back as soon as circumstances permit, probably with a pint in the Queens first and almost certainly on a Tuesday.

Be the first to comment on "Phil’s Forty, 8: Goodbye, Ruby Tuesday"