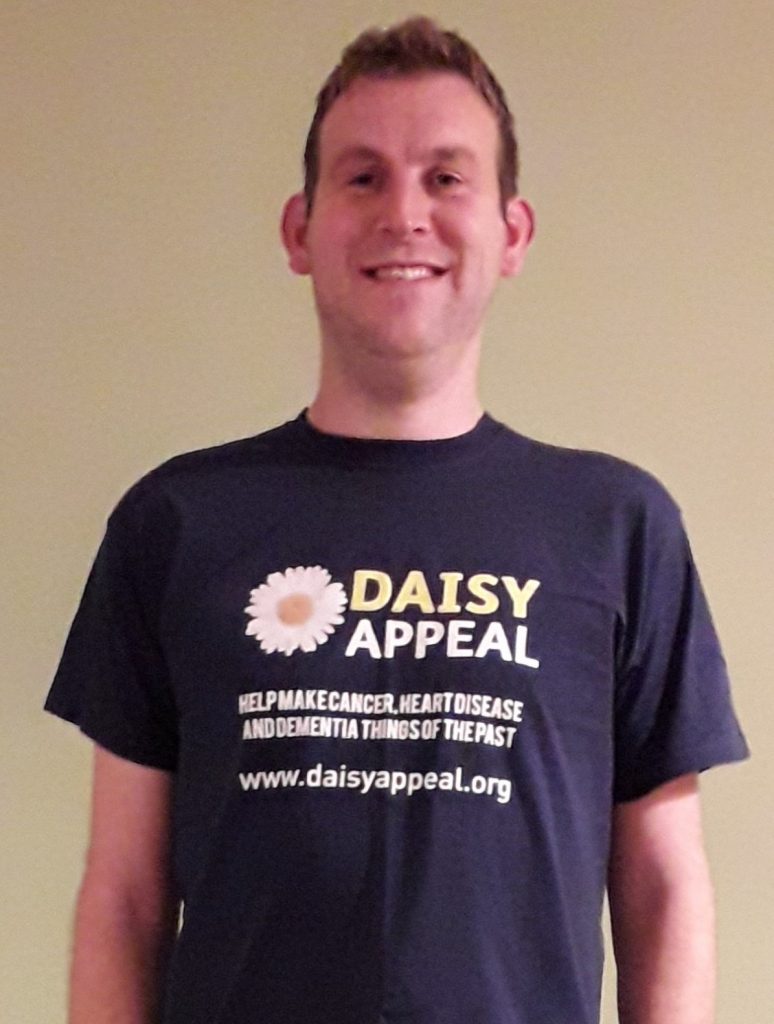 Martin Turner in his Daisy Appeal t-shirt which he plans to wear for the Great North Run.

A first-time charity runner from Newcastle is pounding the pavements to save lives in the Hull and Humber region by raising money for the Daisy Appeal.

Martin Turner will tackle the Great North Run this weekend in memory of his uncle, Kev Turner, who made his home in East Yorkshire with his wife Kim after his Army posting to Leconfield.

In completing the 13.1-mile course, Martin will be running further than he’s ever done before, and keeping a promise to Kev which he made after watching last year’s race.

Martin said: “When Uncle Kev was ill I said I would do the Great North Run for him. He said I should do it and after he passed I knew I had to go ahead.”

Kim hopes that people from the Hull and Humber region will support Martin’s fund-raising efforts and top up the money already raised primarily in the north east.

Kim, who works at Castle Hill Hospital and has served in the NHS for more than 20 years, said: “With Martin being in Newcastle it’s not easy for him because people generally support local charities so we’re giving it a push in our area and we hope people will see this as their local charity.

“We’ve expanded our fund raising effort to Facebook and have started to increase the donations more quickly. His original target was £400 and now we’ve passed that.”

Kev and Kim moved to Leconfield nearly 27 years ago and their children Jade and Callum grew up there. After retiring from the Army Kev joined the civil service, training lorry drivers, working on motorcycles and then training instructors to advanced level.

It was Jade who saved her dad’s life when he had a massive heart attack. He recovered after spending time at Castle Hill Hospital but about 18 months later was diagnosed with Non-Hodgkin Lymphoma. He died in September 2018 at the age of 61.

During his time in Castle Hill Kev became committed to supporting the Daisy Appeal to help its work detecting cancer, heart disease and dementia. Donations from his funeral raised more than £1,300 and now the family are working to add to that.

Kim said: “Kev was looked after so well and was very impressed with the care he got in all the departments. He wanted to support the Daisy Appeal because it is working on cardiology and cancer and he felt that research was needed.

“When Martin told Kev he would do the Great North Run in his name, Kev’s face lit up. He said he was so proud. Martin had thought about doing it but this is what pushed him. He’s struggled with the training and found it hard because he’s not a natural runner. I am just so proud of him. What he’s doing is absolutely amazing.”

Claire Levy, Fundraiser for the Daisy Appeal, said: “The Daisy Appeal is extremely grateful to Martin for taking on the Great North Run in memory of his uncle Kev. The charity relies on the amazing commitment of people like Martin and his family to help to reach its fundraising target and complete the £8.2m radiochemistry and cyclotron unit so we can produce our own radioactive tracers.

“This will allow us to scan patients with certain heart and neurological conditions, including Alzheimer’s, as well as those with cancer. We will have the opportunity to save many lives in East Yorkshire and North East Lincolnshire.”

To find out more about the Daisy Appeal please visit www.daisyappeal.org