A chef who lifted the lid on his 50-year career with tasty tales from the Dorchester in London’s Park Lane to some of the top kitchens in East Yorkshire is now sounding out demand for a second helping of his remarkable memoirs.

Derek Baugh has raised around £6,000 for the Daisy Appeal in 2018 by publishing Memories of a Dorchester Chef and Beyond. Now he’s pondering a second print run to share the stories of his career with a wider audience, and to bring in more money for the charity.

Derek, who lives in Beverley, became well known throughout the region and further afield for his part in transforming the culinary scene in East Yorkshire, first as Head Chef at the Nag’s Head in Routh, then as Managing Director of Willerby Manor Hotel and finally in partnership with his wife, Lee, as owners of the renowned Manor House Hotel in Walkington.

Friends and former diners persuaded Derek to publish the pick of his wealth of anecdotes, and business sponsorship enabled him to donate all the sales proceeds to the Daisy Appeal. The initial batch of 300 sold out quickly, and the Daisy Appeal is now taking orders from people who missed out.

Derek said: “People had always been on at me because of some of the stories I had told. When the beast from the east arrived in 2018 and the golf course was closed for about six weeks I decided to give it a go. I didn’t make any notes – the whole thing was done from memory.

“I chose the Daisy Appeal because I know some of the people who are involved in it and because if I was going to do it I wanted to support a charity. A friend at MKM Building Supplies arranged for them to sponsor the printing, so it sold for £10 a copy with all the proceeds going to the appeal.” 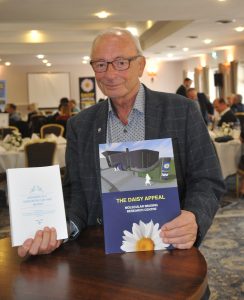 The book is written in the style of the laid-back, convivial and occasionally disjointed after-dinner chats which Derek and Lee used to enjoy with guests over a glass or two after service.

It develops into a fascinating collection of cooking tips, social history and random ramblings as it tells of Derek’s unglamorous upbringing in North Wales and his first venture into catering at the age of 13 in a fish and chip restaurant.

By the end of the 1950s Derek was established at The Dorchester in Park Lane, where he progressed from commis chef to chef poissonier by the age of 20. He arrived in Hull in 1967 to teach at the technical college and three years later joined the Townend Group under John Townend, the former MP for Bridlington who died last year.

When the group acquired Willerby Manor, Derek’s unrivalled expertise, coupled with a network of national and international contacts, enabled him to turn it into a destination venue for dining and functions. Then he did the same after starting from scratch with Lee to convert a tired country house, Northlands at Walkington, into the award-winning Manor House.

The book tells how Derek played a key part in launching the careers of some notable chefs, worked in the kitchen of one of the most famous hotels in the world and built two brilliant businesses on the edge of Hull by combining his passion for food with a business acumen that beat the recession.

Professor Nick Stafford, who launched the Daisy Appeal in 2002, said proceeds from the book will go towards the campaign target of £8.2 million to build and equip the new Molecular Imaging Research Centre, which is under construction at Castle Hill Hospital.

He said: “Derek had a remarkable career and became very well known in the region and in the hospitality business, and the book is likely to ring a few bells with people who dined at his tables and worked in his kitchens.

“We are delighted and very grateful that he is donating proceeds from the book to the Daisy Appeal and using the book to help raise our profile. We hope the demand will be there to support a second print run and maybe more after that.”

To order a copy of the book please email jane@daisyappeal.org

To find out more about the Daisy Appeal please visit www.daisyappeal.org

You can send press releases & local news items to: