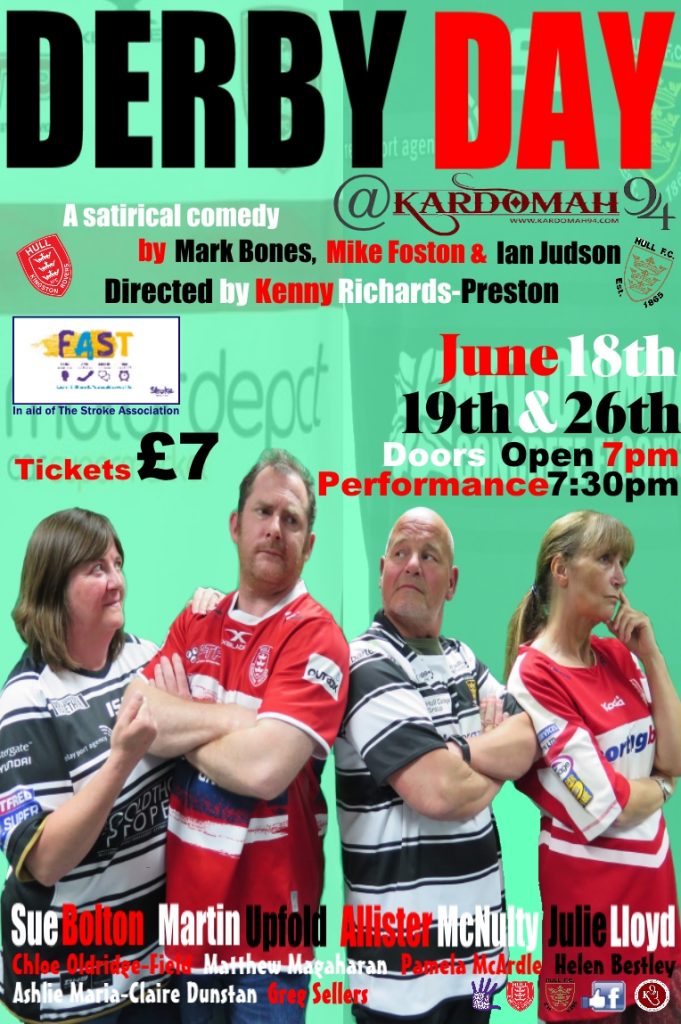 Pony Express Theatre Company are very proud to present our confrontational comedy Derby Day at Kardomah 94 on Alfred Gelder Street Hull, on 18th, 19th and 26th June, leading up to the final Hull Derby of the 2019 Betfred Super League season.

This riotous comedy based on the rivalry between bitter rivals Hull Kingston Rovers and Hull FC will be on stage at 7:30pm on the dates stated above.

Club Mascots Rufus Robin and Airlie Bird will be present at every performance.

The serious side of this production is that it is being performed in memory of one of the co-writers Mike Foston who sadly passed away in 2016. As a result of this loss we are performing this play to raise funds for the Stroke Association, and for the Jack Harrison VC MC Statue Campaign which is being run by Derby Day Producer Ian Peter Judson.

On the evenings of the 18th and 26th June volunteers from the Stroke Association will be present to test people’s blood pressures, educating everyone about the link between high blood pressure and stroke. The performance on the 26th will also include sign language for the deaf and hard of hearing.

Tickets for the production are available now from the venue and online at kardomah94.com and are selling at a good rate so far. Members of the press who wish to attend are asked to contact Ian Peter Judson on 07971 244845 or ian.judson123@gmail.com – press tickets will be complementary but members of the press would perhaps be prepared to donate to the two causes on the night.

Press tickets can be made available for any performance that suits, but must be reserved in advance.

Producer Ian Peter Judson and/or any of the cast can be made available for interview, again press wishing to arrange this must contact Mr Judson in the ways stated above.

We must point out that this confrontational comedy does contain strong language, therefore anybody wishing to attend must be over the age of 18.