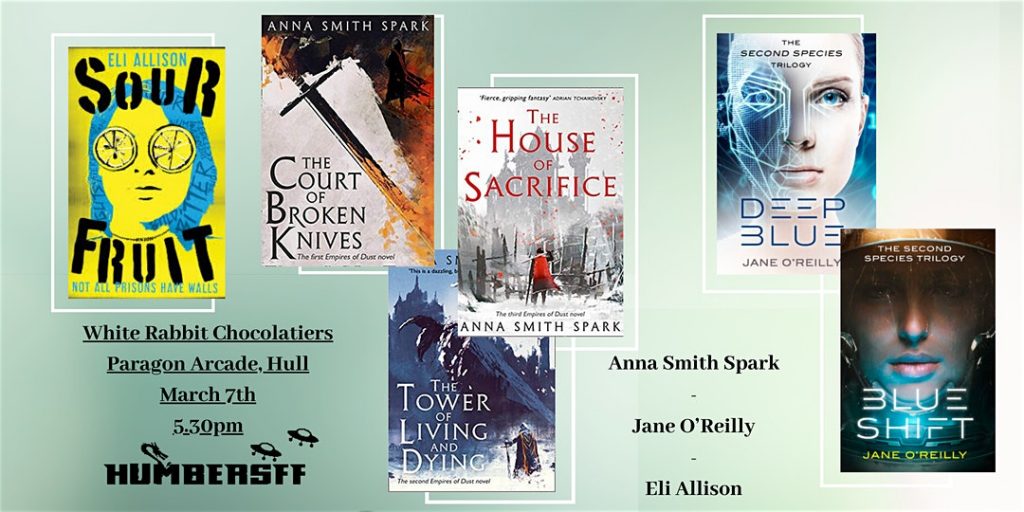 The next Humber Science Fiction Fantasy and Horror event will be held in Paragon Arcade for International Women’s Day, 7th March.

Three female authors will be speaking at a free International Women’s Day event to be held at White Rabbit Chocolatiers in Paragon Arcade on March 7th.

Anna Smith Spark, Jane O Reilly, and Eli Allison will be taking questions and reading from their current work in the latest Humber Science Fiction and Fantasy social. Humber SFF provides the opportunity to meet those who read and write in the speculative fiction genre, and a great chance to discover new by local, regional and national authors.

This will be a relaxed event merging Hull’s historical female influences with International Women’s Day by bringing authors to the region.

Organiser and author Shellie Horst explained: “Our aim is to connect readers who are unable to attend author events held in London and Manchester. It’s also an opportunity for those who’d like to work in the field. HumberSFF joins similar events in Birmingham, Sheffield, Bristol, and London to create an informal community across the country that enables writers, artists, readers and creators to connect.

“We’re lucky to be able to combine the luxurious tastes created by the award winning chocolatiers, White Rabbit, with reading. Their cafe provides a cosy, welcoming space it’s going to be a great night.”

The Humber SFF social gathering is backed by the British Fantasy Society and the British Science Fiction Association. HumberSFF offers a great opportunity for anyone who enjoys reading or writing in genre fiction to discover what’s happening in the industry and make contacts with others who work within it.

Launched in 2016, Humber SFF returns to Hull with the sixth free get-together for those interested in Science Fiction, Horror and Fantasy genres. With help from the British Fantasy Society and The British Science Fiction Association, HumberSFF aims to highlight both national and local authors, publishers, and creators within the genre, without pressure. Past guests have included Ramsey Campbell, R J Barker, and Ren Warrom as well as local authors, Lee Harrison, Linda Acaster, and David Tallerman.