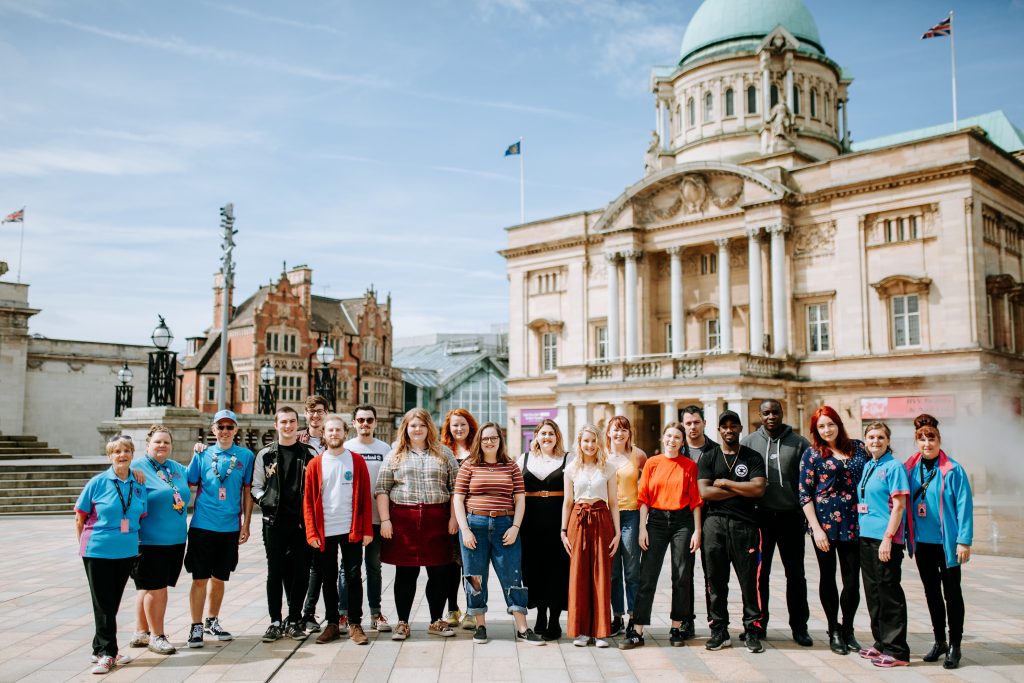 This summer, Hull is heading back to the Edinburgh Fringe Festival as Absolutely Cultured’s Hull Independent Producer Initiative, in partnership with Middle Child, supported by Hull Truck Theatre and Back to Ours, support shows by five, highly acclaimed and exciting theatre companies from Hull.

The Hull Independent Producers Initiative supports and develops Hull’s performing arts sector through training and mentoring, along with championing emerging theatre companies living and working in the city.

Taking place from 2 to 26 August, the Edinburgh Fringe Festival will once again see a Hull Takeover as Hull-based theatre companies The Herd, Middle Child, Roaring Girls, Just Club and international acrobats Casus Circus, commissioned by Back to Ours take to the stage to show the world what Hull is made of.

Three of the visiting companies – The Herd, Just Club and The Roaring Girls – will receive financial support from Absolutely Cultured. In addition all companies will benefit from in-kind support including PR and marketing from Absolutely Cultured as well as wellbeing support from Middle Child. The Herd, Middle Child, Roaring Girls, and Just Club will also be supported by Hull Truck Theatre to preview their shows as part of their ‘Grow’ season and will benefit from the peer support they can provide each other. Both Middle Child and Casus will be able to offer the benefit of their previous successful experiences at Edinburgh fringe to the other companies in the Takeover programme.

This will be the second Hull Takeover at the Edinburgh Fringe following the success in 2017, where the Hull-based companies scooped accolades and received praise across the national media. It was here that Hull theatre company Silent Uproar performed their show A Super Happy Story (About Feeling Super Sad), which has gone on to receive rave reviews everywhere it has performed on its current tour, and Middle Child sold out the Paines Plough Roundabout at Summerhall with the multi-award winning All We Ever Wanted Was Everything, which later transferred to the Bush Theatre in London.

Lindsay Stockley, Senior Producer at Absolutely Cultured, said: “Having a collective voice shouting about Hull and the city’s creativity on the Fringe’s international stage is testament to Hull’s strong cultural identity. There is a camaraderie that resonates across these companies, making this takeover even more special, particularly after the success of the Takeover in 2017.

“We’re excited about showcasing this incredible work and seeing the audience reaction, we’re confident it’s going to be pretty special.”

The return of the Hull Takeover sees Hull’s award-winning theatre company Middle Child return to the Paines Plough Roundabout at Summerhall to present their new lyrical, semi-autobiographical piece, The Canary and the Crow. Written and performed by Daniel Ward, with music by Prez 96 and James Frewer, this grime and hip-hop inspired gig theatre performance is about the journey of a working-class black kid who is accepted to a prestigious grammar school. Original and live music and theatre combine to tell a story of the struggle between a new environment that doesn’t accept you and an old one that has no opportunity.

Formed by University of Hull graduates, founding members and best mates, Jamie Nowell, Matthew Collins and Jake Marsden, Just Club is a new theatre company established in Hull in 2018. The Hull Takeover will see the company take their first ever show, Standing Too Close on Our Own in the Dark, to the Paines Plough Roundabout at Summerhall for one night only.

A gig-theatre event which is as vibrant and hopeful as it is melancholic, is part stand-up, part gig and part spoken word ramble, which sees its performer pour over a journal of original poetry and comedic monologue, with encouragement from a live band.

Standing Too Close on Our Own in the Dark was supported by Middle Child’s First Show Fund.

Middle Child artistic director Paul Smith, said: “The Fringe has played a huge role in raising the profile of Middle Child by putting a company from Hull in front of audiences, critics and producers from further afield, no more so than in 2017, when we enjoyed huge success with All We Ever Wanted Was Everything, as part of the first Hull Takeover.

“To be able to help a new wave of Hull-based companies in 2019 to follow suit, with particular support for wellbeing and mental health at the Fringe, really excites us.”

Perfectly pitched to engage the youngest of audiences, The Herd will perform Slime, the story of a slug, a caterpillar and the quest for a leaf. This squishy, squelchy, hilarious play for two to five-year-olds is a unique, accessible theatrical experience with immersive and colourful play for the very young.

The Roaring Girls create work that is fierce, feminist and fun. The company was founded in 2014, when Rachael Abbey and Lizi Perry created Skirts, Shirts, and Vintage Dresses for Assemble Fest. Since then, they have been a New Diorama Graduate Emerging Company, performed at BeSTival in Switzerland, collaborated with the University of Hull and grown the company to a core team of five. They will take their radically and riotously joyful new show Beach Body Ready, to this year’s Fringe, defiantly championing body positivity and sticking two fingers up at how the media says you should look. This is The Roaring Girls Fringe debut and Beach Body Ready is also supported by Pleasance Futures.

The Herd and The Roaring Girls are Supported Companies at Hull Truck Theatre and The Herd are a Hull Libraries’ Associate Theatre Company. 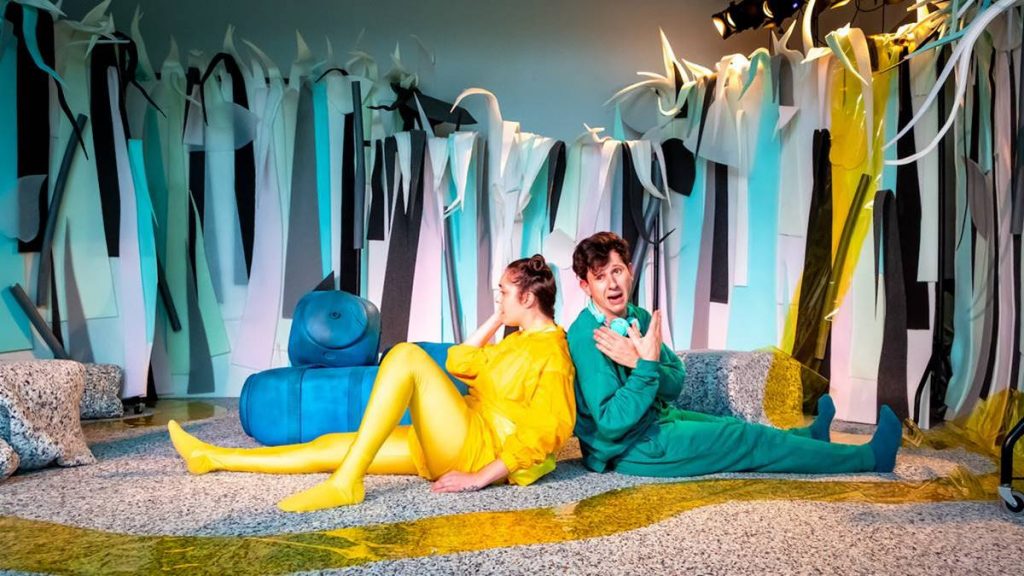 Originating from Brisbane, Australia, Casus Circus will take its Back to Ours co-commissioned DNA to the festival. Casus is recognised as a leader in contemporary circus on the international stage, and DNA is a show of physical theatre in which the acrobats explore, wrestle and nurture their real-life stories.

Performing through an array of emotional, humorous and dangerously skillful moments, the Casus Circus acrobats fill the stage with momentum and stillness, strength and fragility, creating an enthralling ballet of acrobatics.

Louise Yates, Back to Ours Director, said: “We’re delighted to be working with Casus again. They came to our May 2018 half-term festival straight from Sydney Opera House, sold out four shows with Driftwood, and fell in love with Hull at the same time.

“It was immediately clear to us all that they really resonate with the city, so we wanted to team them up with the Takeover to show Edinburgh audiences what we have to offer. DNA will then be heading to Back to Ours later in the year so our Hull audiences can experience it.

“They’re also incredibly experienced, brilliant performers, and their support will be invaluable.”

The Edinburgh Fringe takes place from 2 August until 26 August 2019, but local audiences will have a chance to see previews of four of the shows (Slime, Beach Body Ready, Standing Too Close On Our Own In The Dark and The Canary and the Crow) at Hull Truck Theatre between 13-17 July as part of the theatre’s Grow Artist Development Season.

We are thrilled to help these local companies take the great energy and talent of our city to this year’s Edinburgh Festival Fringe and we are beyond excited to host a day-in-the-life of the Edinburgh Fringe in Hull as part of our Grow Season.”

For further information about the takeover visit www.absolutelycultured.co.uk.