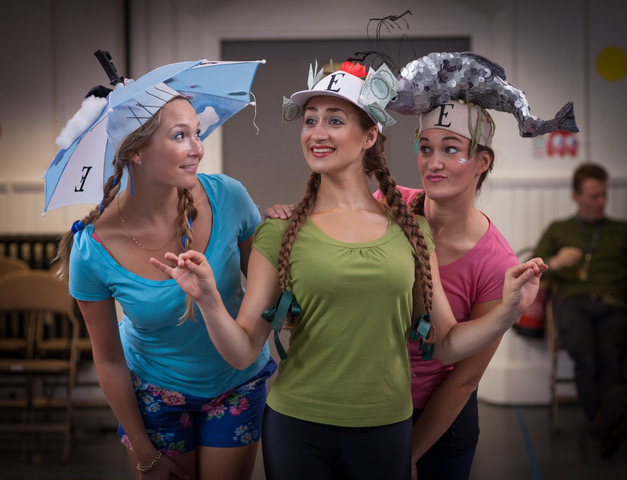 Following the success of previous sell-out family shows, She Productions present a revised version of their 2015 success The Three Kingdoms, one of the 4 musicals in their Young People’s Programme supported by Arts Council England. East Riding Theatre’s Company in Residence will produce 4 family shows throughout 2019 to enable children to experience the magic of theatre from a young age. The programme also offers a professional mentorship scheme for young aspiring theatre-makers and childcare subsidy to support actors who are parents or caregivers.

Beverley based She Productions celebrate their 4th year together with the remount of their inaugural production, The Three Kingdoms, a modern musical fairy-tale of teamwork and togetherness, and the 2nd of 4 annual family musicals at East Riding Theatre.

Director and co-writer, Jessica Duffield says: “It’s so exciting that, what began 4 years ago, has now developed into an annual programme of 4 musicals. It is wonderful to see young people engaging in theatre and we hope to continue bringing in new generations of audiences and artists for years to come!”

Each production offers families an alternative and affordable day out during school holidays, as well as the opportunity to introduce young children to theatre for the first time in a relaxed and inclusive environment. The Three Kingdoms takes the audience on a literal journey from one kingdom to another, starting in the theatre’s café-bar and culminating in the auditorium, hoping to quash the traditional ‘theatre etiquette’ of sitting still and quietly in a dark room for a few hours and, instead, allowing younger audience members to enjoy theatre in an immersive and interactive adventure.

Working alongside Elephant in the Room Hull, disability services for the arts, this newest version of the musical promises to include captioning and moments of basic British Sign Language in every performance, not just as a one-off or on select dates. There will also be touch tours available on request, as well as 2 relaxed performances on 15th & 22nd August, which will be further adapted for adults and children who might benefit from quieter sound effects and softer lighting.

Every performance has the option of going into the ‘Calming Kingdom’, a quiet space where adults and children can go at any time during the show, should they need a moment to unwind.

As the company develops, they aim to develop their inclusivity policy for audience and artists. This programme will be the first to include extra financial support for actors with children, which is often neglected in the theatre industry.

Allison Saxton, who performed in Alice’s Eggstravaganza in Wonderland earlier this year says: “As a parent with little support from family it’s almost impossible to source and pay for good, reliable childcare, especially when working during school holidays. With the numerous low/no pay jobs in the acting industry, it makes things even more difficult.  Thankfully, companies like She Productions are starting to spearhead a change and are recognising the valuable contribution parent actors have to offer and are looking for ways to make it easier for those of us with caring responsibilities, to work.”

She Productions are also employing a young local theatre-maker for each show, upskilling them in an area of their choice and giving them the experience of working in a supportive, professional and inclusive environment. They could be employed as assistant director, producer, technician or a stage manager, like Anja Bryan-Smith, who will be working on The Three Kingdoms.

Anja says: “This is now my second contract with the wonderful She Productions – the first, on Alice’s Eggstravaganza in Wonderland, was the most incredible experience. For someone at the beginning of their career, their support and faith in me has been gold dust! I’m thrilled to have the chance to work with this fantastic company again on The Three Kingdoms.”

The Three Kingdoms runs from 14th-24th August at East Riding Theatre. Tickets can be booked online at www.eastridingtheatre.co.uk or via the box office on 01482 874050.