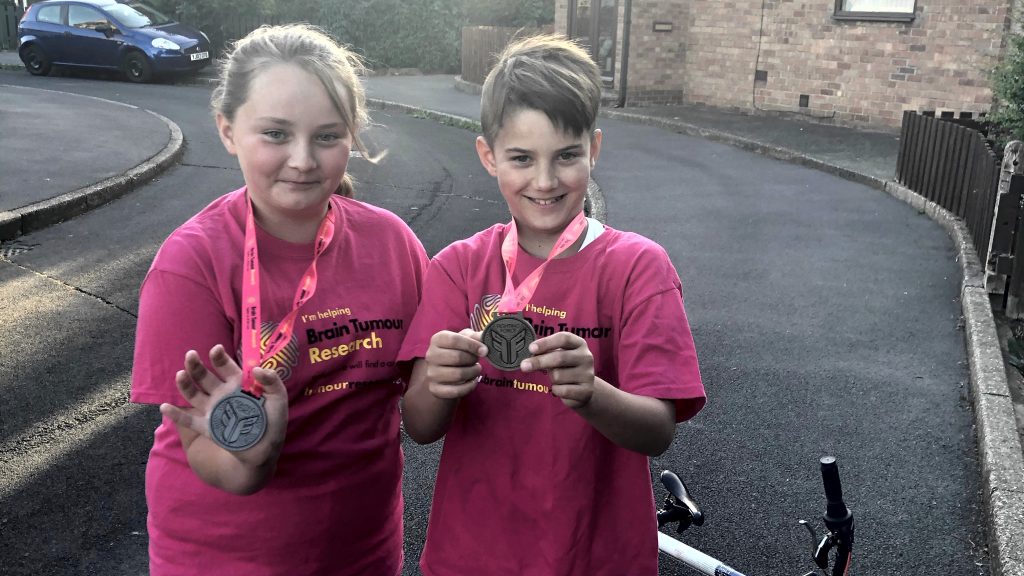 Lottie & Riley have pedalled a grand total of 89.9 miles, raising funds for brain tumour research, in memory of their sister.

A mother and her two younger children have completed a 26-day cycle challenge to help find a cure for the devastating disease which killed her first-born.

Emma Whitfield, of west Hull, along with Lottie and Riley, aged 10 and 9 respectively, set themselves a challenge to cycle 2.6 miles every day for 26 days.

Emma said: “I have supported the charity Brain Tumour Research for a number of years since losing our lovely Evie. She was eight years old when she was diagnosed with a brain tumour following a seizure at school, having had no worrying signs like headaches or vomiting.

“Following a biopsy, we were given the devastating news on 13 March 2013 that the type of brain tumour she had was a diffuse intrinsic pontine glioma (DIPG) – the deadliest form of childhood cancer. Evie had radiotherapy and chemotherapy treatment, but we knew there was no cure. Exactly 10 months later, on 13 January 2014, Evie passed away.

“It was coming up to what would have been Evie’s 16th birthday on 12 May this year, and the plans we had made to mark the occasion had, of course, had to be cancelled because of lockdown. I heard about the impact of challenge events like the London Marathon being postponed or cancelled was having on charities including Brain Tumour Research, so the kids and I thought a cycle challenge would be a fun thing to do.

“In the event, we actually cycled more than 2.6 miles most days and finished pedalling a grand total of 89.9 miles. On Evie’s birthday we cycled the 6.2 miles from home to the cemetery to place a gift on her grave.

“We had a lot of fun doing the challenge and we thought a lot about Evie and talked about her too. Lottie and Riley remember her quite well, even though they were only four and three. Riley is now the same age and in the same year at school as Evie was when she died. There’s a memorial garden at their school dedicated to Evie and they walk past it every day when school’s open.

“It feels so unfair for someone so young to lose their life. We are very grateful to everyone who has donated and hope our fundraising for vital research will lead to a cure so that those diagnosed with brain tumours, including children with DIPG, will still have a future.”

Brain Tumour Research spokesman Hugh Adams said: “It’s impossible not to be touched by Evie’s tragic story and, sadly, she is not alone  – some 16,000 people are diagnosed with a brain tumour every year and, despite the fact they kill more children and adults under the age of 40 than any other cancer, historically, just 1% of the national spend on cancer research has been allocated to this devastating disease.

“Like many organisations the coronavirus pandemic has meant a massive financial hit for us, particularly with the cancellation and/or postponement of challenges like the London Marathon, and we are anticipating a loss of 50% of income in the following three months. We would like to thank Emma, Lottie and Riley and all our supporters who are helping us through these difficult times.”

Brain Tumour Research funds sustainable research at dedicated centres in the UK. It also campaigns for the Government and the larger cancer charities to invest more in research into brain tumours in order to speed up new treatments for patients and, ultimately, to find a cure. The charity is calling for a national annual spend of £35 million in order to improve survival rates and patient outcomes in line with other cancers such as breast cancer and leukaemia and is also campaigning for greater repurposing of drugs.

To add your donation to Emma’s fundraising go to https://www.justgiving.com/fundraising/emma-s-2-6-challenge1552